2019 was a historic year for the energy storage market in California. Several big things happened that will influence the market over the next decade. From major policy changes that will have long-lasting effects on the economics of storage projects, to significant changes to the flagship SGIP incentive program, to unprecedented utility power shutoffs to prevent the risk of wildfire, to another round of fresh data showing storage deployments year-to-date and projections going forward. To say that there’s a lot of things to the process would be an understatement. As we head into 2020, we wanted to summarize the big changes we saw in 2019 and discuss what impact we think they’ll have in 2020.

The CPUC approved the mandatory transition to TOU based rates back in 2018, which happens to coincide with a major overhaul of how the TOU rates are designed. Throughout 2019 the big three utilities: Pacific Gas & Electric (PG&E), Southern California Edison (SCE) and San Diego Gas & Electric (SDG&E) formally transitioned millions of customers onto TOU rates. We’ve published numerous updates on how these changes are getting rolled out within each utility territory. PG&E’s new TOU rates were implemented on a voluntary basis starting in November of 2019 and will become mandatory in October of 2020. We previously summarized PG&E’s new residential and commercial TOU changes. SCE began voluntary moving customers in March of 2019 and will default customers starting in October of 2020. We summarized SCE’s changes for both residential and commercial customers. While SDG&E began transitioning customers in March of this year.

The new TOU rate designs offer good news and bad news for solar + storage customers in California. As the new rates begin becoming mandatory for more than 20 million customers, the bad news is that the new TOU rates are less friendly for solar economics than the legacy TOU rates. With the “on-peak” period moving later in the evening (i.e. 4 pm to 9 pm) solar production that previously was valued as “on-peak” energy is now getting revalued as cheaper “mid-peak” or “off-peak” energy. This effectively erodes the value of solar, as we’ve covered numerous times previously on our blog (see: TOU Rates & the Effect They Have on The Value of Solar). To help ease this erosion effect, the CPUC has authorized grandfathering protections for existing customers, summarized in our Guide to Grandfathering Protections for solar customers. The good news is that the new TOU rates are generally more favorable for storage economics, by offering a more lucrative TOU arbitrage price opportunity. This new reality has already led to an increase in ESS attachment rates, where customers are motivated to pair a battery with their solar PV system. See our SCE case study blog where for the first time we saw an example of residential solar + storage economics beat the economics of a standalone solar PV project.

This highly anticipated decision from the CPUC is a big win for energy storage developers in California. The ruling effectively allows storage customers that charge their battery entirely from solar, to receive full NEM credit when energy from the storage system is exported back to the grid. Prior to this ruling, storage was considered a non-NEM asset and customers were only allowed to receive NEM credits on solar exports to the grid. The CPUC approved this decision in February, we summarized the key provisions in this policy update. The IOU’s are now officially accepting applications for NEM paired storage systems, which we detailed in this more recent policy update.

The California storage market will undoubtedly benefit from this decision long term by enabling storage systems to operate more flexibly and capture full NEM value when there’s a lucrative price signal. Now that the IOU’s have mandated storage customers move to TOU rates with later evening “on-peak” periods, allowing storage exports becomes advantageous when a customer has limited evening consumption. This enables ESS to more fully hedge against the ‘value of solar’ erosion effect we mentioned above, which will likely drive more demand for retrofitting ESS onto existing sites with solar. Storage policy advocates hope this will set a precedent around the county for other states to follow suit. We're hosting a webinar 'The future of energy storage in Calfornia: NEM paired storage now in effect' on January 22 to overview how to model projects under this new policy.

California IOU’s implemented the first round of Public Safety Power Shutoff (PSPS) events in 2019, which preemptively shut off power to electric customers in high fire-threat districts during high-risk wildfire events. Multiple PSPS events occurred in the fall of 2019, which were unprecedented up until this point. The power shutoffs caused over 3 million people to lose utility-provided electrical power and were called in dozens of counties throughout the state. In many cases, customers lost power for multiple days at a time, which drew widespread criticism and backlash. These forced blackouts come after years of devastating wildfires throughout the state, which caused loss of life, billions of dollars in property damage, some of which were found to be caused by utility electric lines.

The PSPS events and increased frequency of fires, in general, have already created a large surge in demand for energy storage systems, especially in the residential sector. As blackouts across California are likely to become frequent, more people than ever will be turning to backup power technology to keep the lights on, driving sales of solar and storage systems. We’ve blogged previously on the fact that using ESS for back-up power and resiliency is likely the number one customer motivation for ESS in the residential market. Furthermore, the SGIP program created a new Equity Resiliency budget, which carves out lucrative incentives for disadvantaged communities facing wildfire risk. We expect to see the risk of future PSPS events drive a strong demand for storage in 2020.

In October, the CPUC finalized a decision that set new rules for the SGIP Equity and Equity Resiliency Budget programs, which will provide lucrative incentives for ESS projects for low-income customers and for customers located in communities facing high risks of wildfires. The incentive levels are extremely lucrative for both programs: $850/kilowatt hours (kWh) for qualified Equity Budget projects and $1,000/kWh for Resiliency Budget projects. To view the eligibility requirements see our detailed policy update on the topic. These newly revised programs are expected to start accepting applications by April 1, 2020.

The existing SGIP budgets in 2019 were a bit of a mixed bag. Demand in the residential segment has been very strong, the current allotment of residential segment incentives is now fully subscribed in all 3 IOU territories, with a growing waitlist of projects. The commercial segment has been a different story, with much slower program uptake. The commercial program is in either step 2 of 5, or 3 of 5, depending on territory. See California Solar & Storage Association’s (CALSSA) snapshot of the current SGIP budget status below. 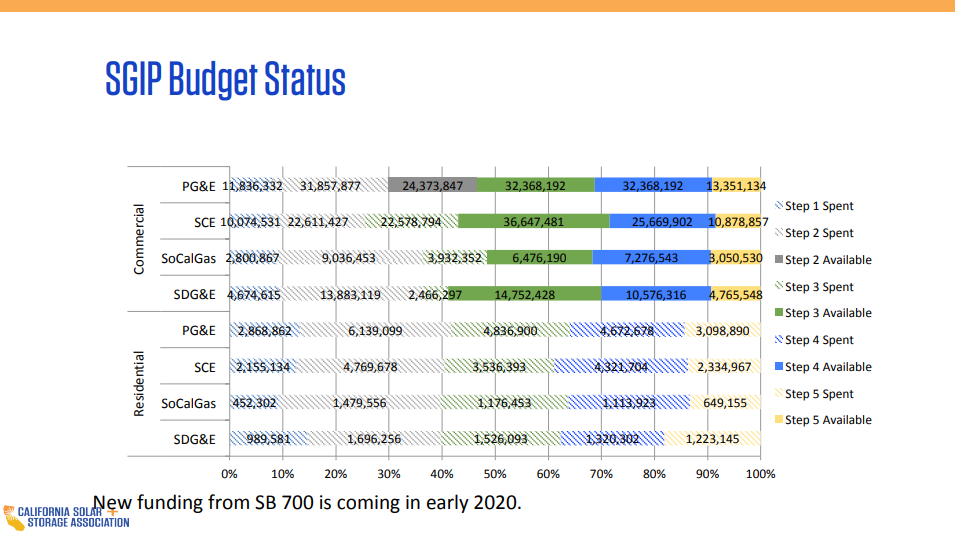 2020 will be a big year for the SGIP program with a number of things happening at once. New rules will be going into effect for SGIP projects, most notably the (GHG) greenhouse gas emissions reduction requirement. Also, more incentive dollars will become available thanks to the passing of Senate Bill 700 (SB 700) which extended the program through 2025 and authorizes an additional $800 million of funding for behind-the-meter storage projects. We summarized SB 700 in a previous policy update.

A proposed decision from the CPUC is expected to get finalized in early 2020 which will set all of the final program rules, including the SGIP equity and resiliency budget which is expected to launch in Q1 of 2020. We expect to see a strong demand for SGIP reservations in 2020, especially for projects that qualify for equity and resiliency budget status, which basically offset the full or near the full cost of the storage system.

2019 was another big growth year for energy storage deployments nationally and in California. Wood Mackenzie and the Energy Storage Association recently published their Q4 Energy Storage Monitor Report, counting more than 100 MW’s of storage deployed in Q3, a 32% increase measured quarter over quarter. The report showed 93% growth in quarterly MWh storage deployments when comparing Q3 of 2019’s (265 MWh’s) vs Q3 of 2018. California was once again the leading state for storage deployments behind-the-meter in both the residential (46.3 MWh) and non-residential (42.1 MWh) segment, driven by falling costs, SGIP incentives, new policies and regulations that strengthen storage’s value proposition, and demand for backup power amid California’s PSPS events.

Wood Mackenzie & Energy Storage Association is projecting a huge growth year in 2020 across all market segments: residential, non-residential, and front-of-the-meter. In the residential segment Wood Mackenzie now estimates that one in five homeowner systems in California will be paired with a battery system next year. Looking out over the next 5 years the report projects the US storage market to grow over 8x from $645m today, to $5,363m in 2024, reaching more than 5 Gigawatts of capacity. 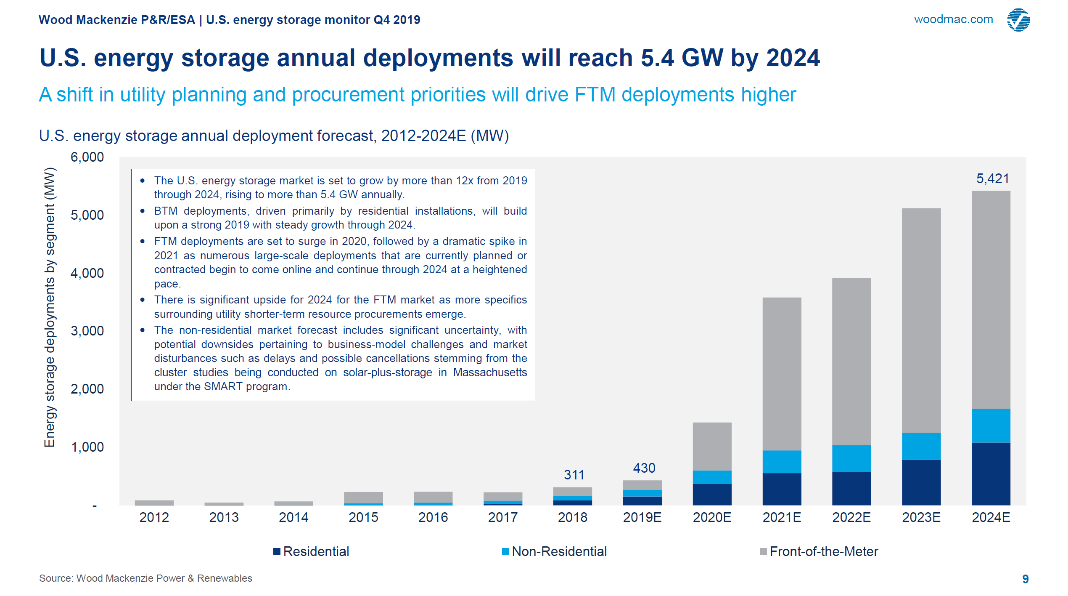 2020 will be another historic year for energy storage in California, and across the county. Energy Toolbase will continue to post updated policy changes and regulations as we move into the new year.