Pacific Gas & Electric (PG&E) has started implementing its new Time-of-use (TOU) rates as part of their 2017 General Rate Case (GRC). In part 1 of this blog we're going to focus on the key changes PG&E is making to their residential rates, and the implication it has on solar and storage project economics. Given that PG&E is the largest utility territory in the United States, with over 5.5 million electric customers served, their rate design changes set an important precedent nationwide.

Note: each sub-heading section below hyperlinks to that topic in our recent "Breaking Down PG&E's 2019 Proposed Rates" webinar.

Once about every three years, the three big Investor Owned Utilities in California (PG&E, SDG&E, SCE) go through a general rate case cycle, which are proceedings to address the costs of operating and maintaining the grid, and forms the basis for customers rates in that service territory. PG&E originally submitted their 2017-2019 GRC proposal back in September of 2015. This was an especially important GRC, as it included some very radical changes to rate designs and TOU rates in particular. The California Solar and Storage Association (CALSSA) submitted their testimony in the PG&E GRC in March of 2017, and participated in settlement agreement hearings on behalf of the California solar industry, in February of 2018. The CPUC announced its final decision in July of 2018, with rates becoming voluntarily available starting in October of 2019 and mandatory around November of 2020. So the clock is ticking for you to get a better understanding of these complex rate structures and how they're going to be affecting your projects.

Why Model With Proposed Rates?

Energy Toolbase enables users to model with proposed rates in our platform, whether that be the first proposal from PG&E, CALSSA's settlement agreement proposal, and now the "Final Decision" rates. Modeling with these newly proposed rate designs is of utmost importance in order to give end customers the best accuracy and transparency on the true economics of their projects. It would not be appropriate to model the 25+ year savings of a solar project with rates that will only be in effect for the 12 months, knowing that significant changes are about to be implemented. Many of Energy Toolbase's users in the PG&E service territory are the most reputable and experienced companies in the business. They operate at a high ethical standard and generally the companies that are out in the market educating customers about upcoming rate changes. It turns out that PG&E is the most highly used utility on the Energy Tooblase platform, based on a recent back-end analytics scrape. This chart shows the top used rates within the PG&E territory (if you're a commercial developer, part 2 of this blog will break down PG&E's new commercial rate designs). 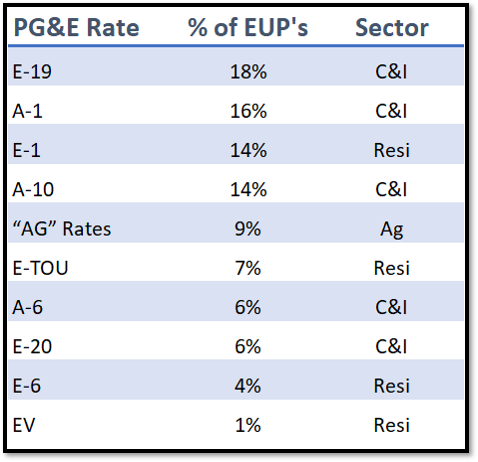 The E-1 rate schedule is the legacy residential PG&E rate, which has a tiered (or block) structure, where $/kWh cost increases at higher usage. Going forward the E-1 rate will only be available as a grandfathered rate to NEM-1 customers currently on that schedule. Those grandfathered customers will be able to stay on their tiered (non-TOU) rate for 20 years from the time they interconnect. The GRC did make some changes to this rate to be aware of:

The new "E-TOU" residential TOU rates have already been implemented. The key elements of both the option A and B rate to be aware of include:

A new residential TOU rate schedule to be aware of is the EV(A), which is an Electric Vehicle rate. While this rate has similarly defined TOU windows to the E-TOU, it has significantly wider TOU price differentials. Within the final GRC decision, PG&E is allowing residential customers with energy storage systems to take service on this schedule. But has an enrollment limitation which will cap this rate at 30,000 storage-only customers, with any EV + storage customers not getting counted in that cap. Customers enrolling in EV(A) cannot exceed 800% of their average annual baseline allowance. Key details of this rate include:

Similar to the other two IOU's in California, PG&E will ultimately default all of its customers onto TOU rates. That is currently scheduled for October of 2020. Grandfathering protections for residential customers who qualify will last for 5 years from the date of PTO (permission to operate). It's important to note that rates and the $/kWh costing amounts are not grandfathered, only the time-of-use periods are.  Residential customers who qualify for grandfathering include:

Check out our full "Breaking Down PG&E's 2019 Proposed Rates" webinar: