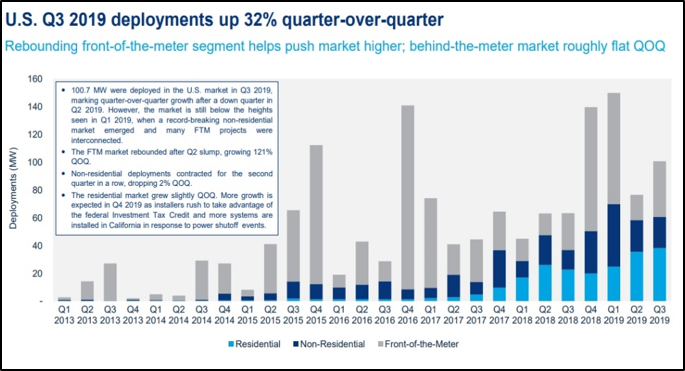 Residential sector deployments grew for the third consecutive quarter and were driven by several factors. One long-standing motivator for residential storage is a customer’s desire to become energy independent, and less reliant on their local utility company.  On top of that, energy storage system (ESS) hardware and installation costs are continuing to decline, which has made the economics of pairing energy storage with a PV system more attractive.

While strong project economics provide sound logic for growth, the primary motivation for homeowners to install an energy storage system is likely for resiliency, which provides back-up power in the event of a grid outage. This trend is expected to accelerate further as a result of the increase in De-Energization, or Public Safety Power Shutoff (PSPS) events being experienced throughout California. All these factors have combined to create strong demand in this emerging market.

Public Safety Power Shutoff (PSPS) events, also referred to as De-Energization by the CPUC, are preemptive power shutoffs designed to reduce the risk of utility infrastructure starting wildfires. PSPS is intended to be a preventative measure of last resort if the utility believes there is a significant and imminent risk that strong winds may topple power lines or cause other issues leading to increased risk of fire.

It’s not widely known, but the PSPS program has existed in California for several years. Previous De-Energization events had only been called in predominantly rural areas and did not receive much attention. This changed significantly starting in the fall of 2019 when widespread PSPS events were called, which ultimately caused over 3 million people to lose utility provided electrical power, in some cases for several days on end. Ever since, the program has received extensive media coverage and has even become a household acronym for many residents and government officials.

These widespread PSPS events in the fall of 2019 were ultimately the result of a dramatic increase in the number of devastating wildfires in the years prior. PG&E, California’s largest utility, was driven into bankruptcy in early 2019, after being found liable for a series of destructive fires between 2014 and 2018, which caused billions of dollars in damages and loss of life. The Wall Street Journal reported that PG&E infrastructure alone caused more than 1,500 fires during that time period.

As these De-Energization events have become more common, the CPUC has become more active in PSPS rulemaking. In 2018, the CPUC adopted resolution ESRB-8 aimed at strengthening order and accountability surrounding De-Energization events. The resolution created guidelines for customer notification as well as reporting on PSPS events after they occur. Following the adoption of ESRB-8, the CPUC opened a new Rulemaking Proceeding R. 18-12-005 with the goal of further examining and refining the processes and practices within the utility PSPS programs. In Phase 1, they succeeded in improving communication protocols, while Phase 2 aims to detail and define additional levels of communication with customers as well as emergency responders.

In January of 2020, the CPUC finalized its plan to implement Senate Bill 700 (SB 700), which authorized a five-year extension of the SGIP program. The CPUC decision approved an additional $675 million of total funds for SGIP energy storage budgets, of which $513 million was carved-out specifically for the Equity Resiliency projects. This massive carveout for equity resiliency projects came as a big surprise to many, and effectively siphons available funds away from standard residential and commercial SGIP energy storage projects.

The Equity Resiliency budget provides incentives to customers in high-fire risk areas, who are considered medically vulnerable or low-income, and for critical facilities that serve those customers, as defined by the CPUC. We summarized the eligibility guidelines in a previous policy update here: A Guide to SGIP’s new Equity & Resiliency budget Incentives for Energy Storage projects. Customers who qualify for Equity Resiliency Budget SGIP projects would receive an incredibly lucrative incentive level of $1,000/kWh, which the CPUC has stated was set to “fully or nearly fully subsidize the installation of a storage system.”

SGIP program administrators are expected to start taking applications for these new SGIP programs soon. For residential projects under 10 kilowatts (kW), applications will be accepted under the new rules starting February 18, 2020. For all other projects larger than 10 kW, applications will be accepted starting April 1, 2020. Below is a breakdown of the allocations for the new SGIP storage incentive budgets, courtesy of the California Solar and Storage Association (CALSSA):

Now, these impending PSPS events are expected to create another wave of demand for pairing ESS with a solar PV system, giving homeowners back-up power during planned grid outages. If that wasn’t enough, the new SGIP program budgets’ massive $500+ million-dollar carveout for Equity Resiliency projects is expected to fuel that demand even further. Moreover, the market is more mature now, with several proven and reliable tier 1 energy storage solutions available for consumers. All taken together, it’s safe to say the behind-the-meter energy storage market will see another huge growth year in 2020, with massive potential for growth in the decade ahead.