The recent “Net Metering version 2.0” (NEM v2.0) proposed decision handed down by the California Public Utilities Commission (CPUC) is being hailed as a huge victory for the solar industry. The press have proclaimed that the CPUC rejected the utilities proposals and decided to side much closer with solar advocates. For someone that has been following this proceeding closely from the beginning, I agree and feel that the solar industry did very well considering the range of outcomes. But I also believe that there has been some misinterpretation on the issue of preserving “full retail credit” Net Metering.

In actuality, the CPUC’s ruling effectively ends full retail credit NEM as we know it today, which values exported energy to the grid at the full retail rate of energy. The ruling explicitly states that non-bypassable charges (NBC’s) can no longer be offset by solar, but instead have to be paid based on a customers’ gross usage. Under today’s NEM rules if a solar homeowner produces the same amount of energy they consume, at the end of their 12-month NEM cycle they would not have to pay non-bypassable charges. All the NBC’s would get netted out. But the new NEM v2.0 rules change this, and effectively discount solar exports by the combined amount of NBC’s for a particular rate schedule. This is the mathematical equivalent of haircutting exports, or discounting the rate solar gets credited at.

What are Non-bypassable charges?

Non-bypassable charges are volumetric based charges that cover the utility's costs associated with programs such as low-income ratepayer assistance, energy efficiency, and nuclear decommissioning of shut down plants. The Proposed Decision explicitly defines non-bypassable charges as “transmission charge, Public Purpose Program Charge, Nuclear Decommissioning Charge, Competition Transition Charge, New System Generation Charge, and Department of Water Resources bond charge.” Based on my calculations, these NBC’s collectively add up to anywhere between $0.02 to $0.05/kWh depending on the utility rate tariff schedule, when including the transmission charge.

What effect will this have on solar project economics?

It depends. It depends on a number of things, including: (1) how much solar a NEM customer exports back to the grid, which is determined by (2) how big the solar system is sized, relative the customers’ total annual usage, and (3) the customers’ unique load profile, which shows when they use. It also depends on (4) the design specifications of the solar system, and (5) how much NBC’s collectively amount to on a particular rate schedule.

It’s hard to generalize what the net effect is because it depends on a number of variables that are specific to each customer. I ran some scenarios to quantify the amount of energy that gets exported and the reduction in dollar savings. I used the typical residential load profile that the utilities used as an exhibit in the NEM v2.0 proceeding and assumed 12,000 kWh of gross annual usage. I modeled six different sized solar systems, ranging between 33% to 100% offset, in terms of kWh annually. The matrix below shows the amount of solar being exported and the corresponding reduction in dollar savings.

This illustration is meant to give an indication of how much solar gets exported for various sized systems. It may be surprising to see that on a 75% offset system, about half the annual solar production gets exported to the grid, which would translate to a $170/year ($14/month) haircut in dollar savings, assuming $0.04/kWh combined NBC’s. 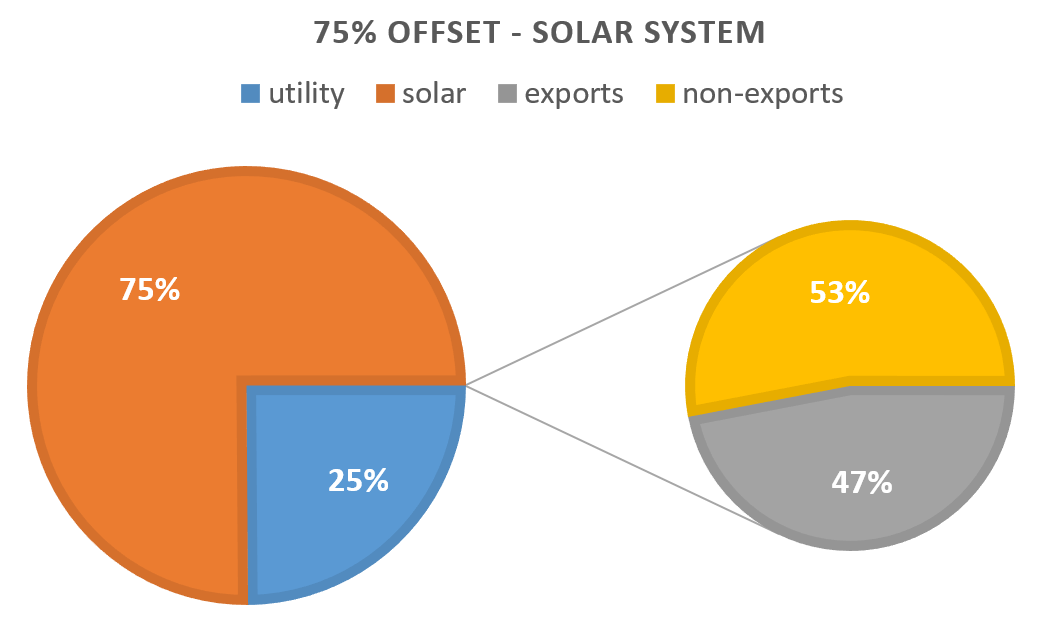 The percentage of exports will of course vary based on the load profile of the customer and the design specifications of the solar system. For instance, a west facing solar system would export less on average. Also a commercial customer with a similar sized offset system would likely export less on average, because they tend to have more mid-day usage compared to a residential customer that peaks later in the evening.

The CPUC’s recent ruling on NEM v2.0 is an indisputable victory for the California solar industry. The CPUC rejected the utilities proposals, which would have gutted net metering and destroyed the solar value proposition. But from my perspective, no longer allowing non-bypassable charges to be offset by solar technically ends the full retail value Net Metering that exists today. The bottom line is that all solar exports will get haircut by the amount of NBC’s for a particular rate schedule. So whether you frame it by saying “no more netting of NBC’s” or “solar exports are getting a haircut” the math is the same. Exports are valued less than imports.

To accurately quantify the dollar savings of a solar project under the new NEM regime will require the determination of how much solar gets exported. You can do this by either: (1) acquiring a customers’ interval meter (aka Green Button) data file and then simulate how much solar gets exported, or (2) estimate the amount of solar that gets exported based on a baselined sample load profile. Either way, simply knowing how much energy a customer uses will not be enough. Solar salespeople will need good software capable of performing this analysis. They will also need to explain exports and present their analysis in clear terms to their potential customer. The more that non-bypassable charges collectively amount to, the more important this all becomes.