A Definitive Guide to the Updated SGIP Incentive Program (2020 Edition)

The Self-Generation Incentive Program (SGIP) in California is the longest running and most lucrative incentive program for behind-the-meter energy storage projects in the country. The program received a historic new commitment of funding in 2018 when the California legislature passed Senate Bill 700 (SB 700), which provided the program an additional $800 million in total funding, designed to extend the program for 5 years.

In January of 2020 the California Public Utilities Commission (CPUC) adopted a final decision authorizing the injection of $675 million into SGIP’s energy storage budgets, as directed by SB 700. The decision established the final allocation of incentives by budget category and the framework for the new program rules. This then led to the publishing of the new 2020 SGIP Handbook, which details the specifics of the application process, incentive levels and calculation methodology, and program eligibility rules. The new SGIP program rules as spelled out in the 133-page guidebook are an awful lot to make sense of. In this guide the Energy Toolbase team has decoded the guidebook and distilled down the most pertinent information to help solar and storage developers navigate the new rules.

Brief History of the SGIP Program:

Before we dive into the new rules, budget carve outs and qualification criteria, it’s important to give context on how the program got to where it is today. The CPUC has an about the SGIP program page, which provides an in-depth history of the program, explaining  that it’s been around almost 20 years and was originally created as a peak-load reduction program in response to the California energy crisis in 2001. In 2006 the program was redesigned to incentive customers who install onsite solar PV systems and eventually included energy storage systems (ESS) into the eligible technologies. The program has evolved significantly since it began, adding and removing eligible technologies, changing incentive levels and the methodology by which they're calculating and ultimately prioritizing the reduction of greenhouse gas emission (GHG). The GHG requirements were initially put in place in 2009. Today the program states that its primary purpose is to “contribute to GHG emission reductions, demand reductions and reduced customer electricity purchases, resulting in the electric system reliability.”

The CPUC's final decision in January of 2020 allocated $675M of SB 700 funds towards energy storage projects, which represented roughly 80% of the total SB 700 funds. The breakout by category is as follows: Equity Resiliency budget received the lion’s share of the funds, $513M, roughly 76%. Equity, Residential category received $24M, roughly 5%. Large scale storage received $81M, roughly 12%. Small residential, projects under 10 kW in size received $57M, about 8%. The new total incentive amounts by budget category, when combining the new SB700 funds with existing funding can be seen in the table below.

The figure below shows the SGIP incentive levels by step. *Note: steps 2 through 5 are identical to the incentive levels from the 2017 program relaunch. Each step declines by $0.05/Wh, but if a given step becomes fully subscribed within 10 calendar days among all PA territories, the incentive level would decline by $0.10/Wh. A new step 6 and step 7 level was established for the small residential, general market projects. The current incentive steps by category and corresponding rates in each PA territory are updated here: https://www.selfgenca.com/home/program_metrics/.

The Equity Resiliency budget is a newly created carve out, which provides incentives for on-site residential and non-residential storage systems for low-income, vulnerable customers in high-risk fire threat districts (HFTD) or those who have been affected by the blackouts across the state, also known as the Public Safety Power Shutoffs (PSPS). PSPS events, also referred to as De-Energization by the CPUC, are preemptive power shutoffs designed to reduce the risk of utility infrastructure starting wildfires. PSPS events are intended to be a preventative measure of last resort if the utility believes there is a significant and imminent risk that weather conditions could lead to increased risk of fire. The Equity Resiliency incentive level is set at $1,000/kWh, which the CPUC has stated was designed to “fully or nearly fully subsidize the installation of a storage system.” The eligibility requirements are as follows:

The Equity Budget was designed to provide incentives to low income customers in disadvantaged communities (DAC). The program was originally established in 2016 but never had meaningful uptake given that the incentive level was set at the same amount as the general program. In the new SGIP decision, the CPUC increased the Equity budget’s incentive level to $850/kWh. The eligibility requirements are as follows:

Many of the existing non-residential SGIP program rules carried forward from the 2017 program and handbook, but a few key changes were made:

Most all other of the existing non-residential SGIP program rules from the 2017 program relaunch, which we summarized in a previous blog in 2019 still apply.

Many of the existing residential SGIP program rules carried forward from the 2017 program and handbook, but a few key changes were made:

The new 2020 SGIP program will offer an additional $150/kWh (or $0.15/Wh) incentive adder for non-residential customers that do not service low-income or disadvantaged communities. To qualify for the incentive adder ESS projects must demonstrate the storage system can provide resiliency or back-up power and operate in the event of grid outage. This incentive will be additional and added to the step incentive level the customer is eligible for.

Note: the resiliency adder is not expected to go live until the May or June time frame according to the California Solar and Storage Association (CALSSA). Program administrators first need to file advice letters, which are expected to be submitted around April 15.

There are a number of incentive limitations for developers to be aware of that are explicitly stated in the SGIP handbook, including:

Commercial customers must dispatch their ESS to ensure the system reduces at least 5kg/kWh for each system. If the system does not reduce by at least that level, the customer will lose a portion of their performance-based incentive (PBI) at a rate of $1 per kg ($1,000/ton). The penalty cannot exceed the PBI amount for a given year. Additionally, if a commercial developer’s fleet repeatedly increases GHG, they risk program suspension.

Small residential customers are also required to reduce GHG emissions but will be required to comply at a developer fleet level. If a developer’s fleet is found to increase emissions in aggregate, the developer could face a suspension from the program.

The chart below shows an estimate of the hourly GHG intensity of the grid (kg/kWh). *Note: the high GHG intensity periods generally line up with the 4p – 9pm “on-peak” period, so energy storage systems charging during the day and discharging during the “on-peak” period at night should be in compliance with GHG reductions, assuming they can overcome round trip efficiency loses.

Figure 4: Estimate of hourly GHG intensity of the grid 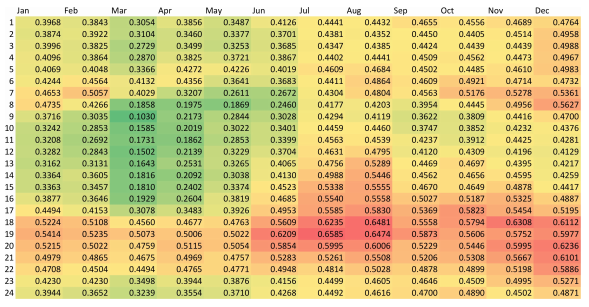 Updates made in Energy Toolbase

We’ve updated our global incentives in Energy Toolbase to reflect the new rules and incentive levels as summarized above. Our incentives should dynamically calculate the SGIP incentive correctly for all scenarios.