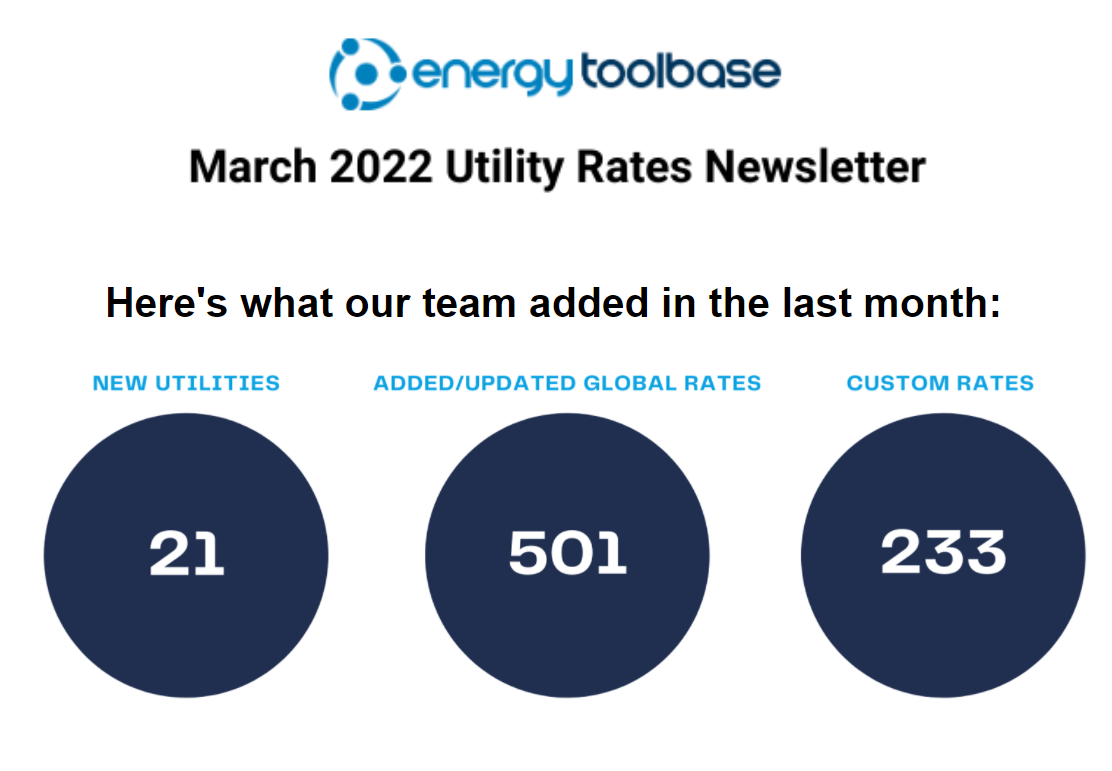 California IOU Updates
PG&E and SCE had the most substantial updates of the California IOUs. Part two of PG&E’s Annual Electric True-Up (AET) went into effect March 1st, 2022, which brought with it an increase to the generation revenue requirement and a decrease to the Power Charge Indifference Adjustment (PCIA) revenue requirement. According to Advice Letter 6509-E, PG&E’s overall bundled average rates increased by 10.5%, while the Direct Access (DA) and Community Choice Aggregator (CCA) average rates decreased by 16.4%.

For PG&E residential Time-of-Use (TOU) customers, the charges increased by an average of 12%. The standard non-TOU rate E-1 increased by 11.21%, and the off-peak energy kilowatt-hour (kWh) charges for optional electric vehicle rates EV and EV2 increased by 42% and 16.81% respectively.

SCE’s rate increases were more straightforward. Standard and TOU residential rates both received a near steady 8% increase to their charges across the board. Commercial rates GS-1 and GS-2 increased by 9% and 10% respectively, while several commercial TOU rate options increased by 8-12%.

CCAs are likely to update soon to better align their rates with the increases to PG&E’s and SCE’s generation charges. Our in-house utility rates team has already updated a few of these CCAs and will continue to do so as finalized rate changes are released. Users are encouraged to reach out to utilityraterequest@energytoolbase.com with any questions or rate requests, our team is always happy to help!

SMUD Rate Transition
In March 2019, Sacramento Municipal Utility District (SMUD) approved plans to restructure, rename, and increase several rates by the year 2023. Commercial and Industrial Time-of-Day rates were set to be restructured in 2021, but the plans were postponed for a year due to COVID-19. The transition to the new restructured rates began in October 2021 and, as of March 2022, these rates are now fully transitioned.

SMUD states that the revenue produced by these rate changes will improve wildfire prevention and mitigation, bolster infrastructure, and help meet clean energy compliance requirements. The new rate structures incentivize customers to reduce or shift their energy use from peak hours (5-8pm). According to SMUD, the average residential customer will see an increase of about $1.91 per month in 2022.

Following these changes our rates team has restructured and renamed our SMUD Commercial and Industrial rates effective March 1, 2022. Below is a breakdown of the rate transitions. The schedules being replaced are referred to as "legacy" rates and are closed to all new customers as of October 1, 2021.

CPS Energy
The San Antonio City Council approved a rate increase request posed by CPS Energy in January 2022. This 3.85% base rate increase serves to recover many costs incurred by Winter Storm Uri which devastated Texas’ electric grid back in February 2021. Nearly 3.5 million Texans were without power, and customers’ electric bills skyrocketed due to the instantaneous energy demand caused by the freezing temperatures. The approximate $73 million in revenue obtained from this increase will be used to improve infrastructure resiliency, advance electric grid technology, and increase employee hiring. On average, a residential customer is likely to see a $5.10 increase on their monthly electric bill—$3.84 of that comes from base costs, while the other $1.26 comes from an increase in fuel costs. CPS Energy intends to recover $418 million in fuel costs associated with the winter storm over the course of the next 25 years. Multiple additional rate increases are scheduled to take effect in 2025 and 2027, for a combined total rate increase of 15% within 5 years.

Utility Rates March 2022 FAQ:
What is the rate turnaround policy at ETB?

Did You Know? – Billing Proration
Our in-house utility rates team has come across many utilities that prorate their customers’ bills. Ameren, Dominion Virginia Power, and Anaheim Public Utilities are some of the major electric utilities that incorporate this type of billing technique. These utilities take into consideration the time of the month the customer used their electric services to keep bill amounts fair, preventing over or undercharging.

Monthly customer service charges or minimum monthly demands can serve as telltale indicators of a prorated bill. A normal billing cycle is 30 to 31 days—if you notice your customer’s bill falls somewhere outside of the regular billing cycle, then there is a possibility that the bill is prorated. Working with bills that are prorated can be a source of minor discrepancy when testing in the Energy Use Profile as most of our rates are based on a typical number of days in a billing period. Users can contact the rates team at utilityraterequest@energytoolbase.com if you have any questions regarding an electric bill.