The Evolution of New York’s Reforming the Energy Vision (REV): An Overview of Solar & Storage Market Drivers
By Kevin Mulvey

Over the last decade, we have seen major shifts in energy policy and renewable resource development throughout the United States. Market leaders such as California and Hawaii have continued to set the bar for the rest of the country, but they are no longer in a league of their own when it comes to developing clean energy and the policies that drive success. Since Governor Andrew Cuomo introduced Reforming the Energy Vision (REV) in 2014, New York has been on the leading edge of clean energy reform and innovation, and the plans indicate they will continue to lead over the coming decade.

This article will be the first in a series that focuses on breaking down recent changes in New York’s energy market and what it means for deploying solar + storage systems across the state. Throughout this series, we intend to demystify the most complicated aspects of the changing energy market and demonstrate the best ways to develop solar plus storage in New York. Before delving into those details, however, it is important to gain some background perspective and make sense of the major pieces of the puzzle that have been put together under REV to date.

Following the massive destruction of Superstorm Sandy in 2012, New York’s vulnerable electric grid and critical infrastructure was exposed and heavily scrutinized. It was clear that drastic action was needed to ensure the future security of New York’s roughly 20 million citizens. On top of that, if New York were going to succeed in providing a clean energy future, the electric system would need an overhaul. Enter Andrew Cuomo and the announcement of Reforming the Energy Vision.

The goal of REV was to restructure New York’s energy industry and the ratemaking standards that have been in place for decades. In its place, a consumer-centric model would be implemented that could rein in the markets and take advantage of burgeoning renewable technologies. Many bold targets were set, but none more core to the strategy than a 40% reduction in Greenhouse Gas (GHG) Emissions by 2030, and 80% by 2050. To that end, a parade of laws, orders, and standards of increasing complexity were devised, and New York’s Public Service Commission (PSC) was conscripted to oversee various aspects of the state’s ambitious goals.

The vision was broken out into two separate tracks of reform: the Track I Order was issued in February of 2015 and focused on regulatory reform; the Track II Order was issued in May of 2016 and defined the ratemaking reforms that would drive to the goals of REV. These two orders would be the starting point for the State Energy Plan (SEP) and more than 40 initiatives that fall into the following buckets:

Leading up to REV, the NY Sun Solar Initiative was launched by Governor Cuomo in 2012 to help drive the growth of solar capacity throughout the state. In 2014, in conjunction with the unveiling of his Reforming the Energy Vision, Cuomo announced the expansion of NY Sun, committing $1 billion to grow New York’s clean energy economy in an effort to add more than 3 Gigawatts (GW) to the state’s solar capacity.

Since that time, the state has seen a total installed solar increase by almost 2,000 Megawatts (MW). In May of 2020, a petition was approved by the PSC authorizing the expansion of the program through 2025 with an additional $573 million in funding. This supports the expanded statewide goal of installing 6 GW’s of solar capacity by 2025.

In 2016, the PSC issued the Clean Energy Standard (CES) order, a cornerstone of REV that officially adopted goals from the State Energy Plan. CES gave New York its “50 by 30” mandate, where 50% of all electricity generated in the state would come from renewable resources by 2030.

To lead the state towards this target, CES created the Renewable Energy Standard and a Zero-Emissions Credit requirement which forced utilities to invest in renewables and preserve existing zero-emissions generators. Since the creation of the standard, these two mechanisms have proved successful in turning the state's goals into an attainable reality. In 2019, Governor Cuomo re-evaluated the programs’ targets and called for the expansion of CES, moving the needle to an even more ambitious goal of 70% renewable generation by 2030.

To safeguard the continued expansion of distributed energy resources (DER) while also ensuring the evolving utility business models could benefit from higher DER penetration onto the grid, the PSC was tasked with developing an effective replacement for net energy metering (NEM).

In 2017, the PSC launched the Value of Distributed Energy Resources (VDER) mechanism. VDER, also referred to as the Value Stack, is a replacement for NEM that encourages the development of DERs in such locations that benefit the grid, and that generate energy during peak grid demand (something that NEM failed to do.) The mechanism attempts to take into consideration a variety of parameters that would help define how energy is valued. It does this by considering the physical location of the energy, the environmental impact of generation, the amount of energy created, and how much demand is offset from the grid. All these considerations are intended to reflect not only the monetary value of renewable energy but also to capture the societal benefits to the wider deployment of renewables. 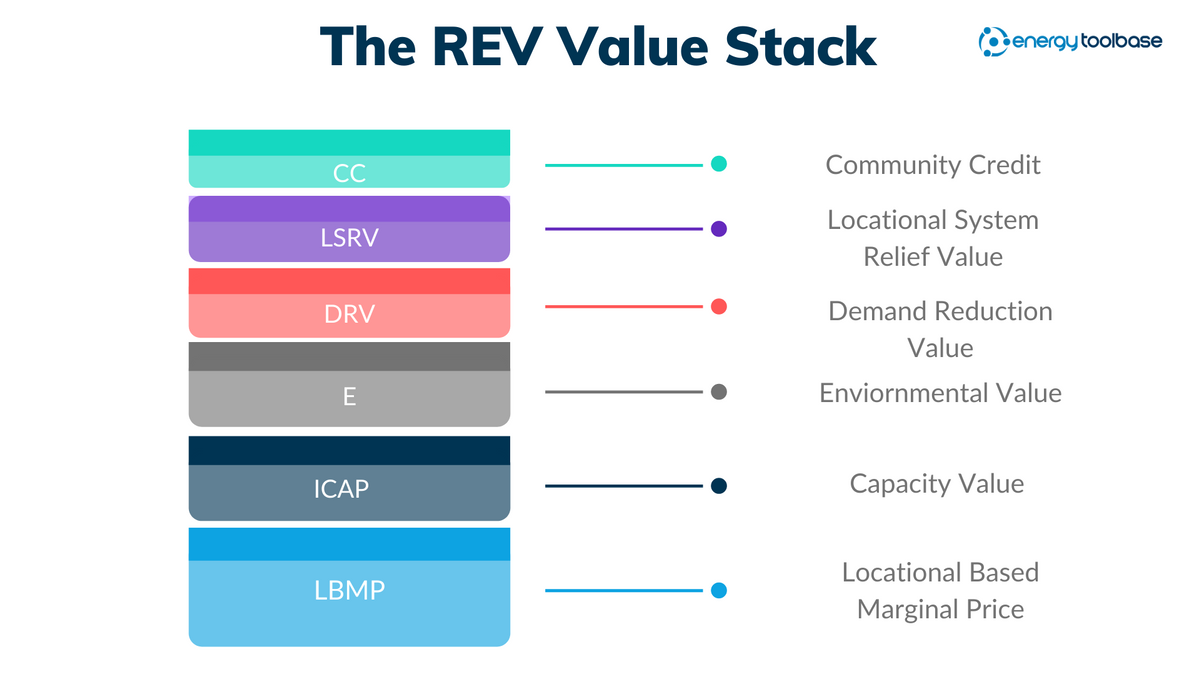 Since its inception, VDER has presented developers with challenges in navigating the complex program. The complete overhaul of the DER compensation method would inevitably have its flaws. In fact, the PSC anticipated further review of each aspect of the Value Stack after the program had been active for a year and has since taken strides to ensure changes were made that would accurately reflect the value of exported energy, creating a more advantageous market for developing renewable resources.

To date, we have seen continued growth in installed capacity in New York. While it might be complex or at times imperfect, the VDER mechanism has proved to be successful. At Energy Toolbase, we aim to support this program and will continue to ensure developers are equipped to navigate the waters. We’ll have much more to come on that throughout this series.

Up until 2018, energy storage had been effectively disregarded in the energy policy developments under REV. Renewable power distribution was rapidly expanding, but the intermittent power provided by these resources did not solve the problems of peak demand occurring as the sun was setting. To provide flexibility in the clean energy supply, the grid would inevitably require substantial deployments of energy storage. In his 2018 State of the State address, Gov. Cuomo revealed a new set of energy goals, including 1,500 MW of energy storage projects by 2025.

It was now up to the PSC to design an implementation plan. With the help of the New York State Energy Research and Development Authority (NYSERDA), the Energy Storage Roadmap was published in June of 2018. The roadmap provided recommendations for actions that would accelerate storage deployments throughout the state and identified near-term policy and regulatory objectives that would help achieve the Governor's ambitions.

In Dec. of 2018, the PSC issued the Energy Storage Order, which authorized much of the Roadmap recommendations and expanded the storage deployment target to 3,000 MW by 2030, with Gov. Cuomo’s initial goal remaining as an interim target. The actions resulting from the Order successfully kick-started the energy storage industry in New York. Most notably, these actions include the creation of the Bridge Incentive Program, regulatory modifications favoring storage capabilities, streamlining of permitting and project siting, changing utility storage procurement requirements, and a slew of efforts to reduce costs and increase efficiencies.

The Order also included recommendations for DER participation in the wholesale energy market. Currently, improvements to market design have been negotiated and are expected to take effect in 2020 and 2021. This an area of interest and we intend to expand upon these new regulations in a future article focused on the NYISO wholesale market.

That brings us to 2019, and the introduction of the Climate Leadership & Community Protection Act (CLCPA). This climate action bill was signed into law in the summer of 2019 and codifies the ambitious goals that had been developed over the previous five years. Several of the initiatives were extended or enhanced, establishing nation-leading objectives that will guide New York to a carbon-free future, and create new standards for the rest of the country. The bold climate targets within the legislation include:

This historic landmark for the state of New York is the culmination of half a decade of clean energy reform, and another building block that will continue to drive New York’s clean energy industry to new heights.