The Glidepath: How Smooth will the Transition from NEM-2 to NEM-3 be in California?

The California Public Utilities Commission (CPUC) is expected to render a Proposed Decision (PD) in the all-important “NEM-3” successor net energy metering (NEM) tariff proceeding within a couple of months. There are numerous important issues within the broader proceeding that the CPUC will rule on. One high-stakes issue that many will be watching closely is how the CPUC decides to implement a glidepath from NEM-2 to NEM-3, which determines how gradual or abrupt the transition to the new tariff rules will be. It’s widely expected that NEM-3 will result in lower credit values assigned to exported solar PV production back to the grid, which will erode the value of solar. But it remains uncertain how quickly the CPUC will phase in the new reduced export values.

CPUC Decision (D.16-01-044) established the foundation of the NEM-2 tariff currently in effect, which specified that a later review of the tariff would be conducted due to “interactive, yet unresolved, policy movements” within the Commission but outside of the proceeding’s (R.14-07-002) scope. In August of 2020, the Commission adopted an Order to revisit existing NEM tariffs pursuant to the requirements Assembly Bill 327 (AB 327), which paved the way for the NEM-3 proceeding to officially commence. In February of 2021, the CPUC then issuedD.21-02-007 which adopted the guiding principles to assist in the development and evaluation of proposals for the successor NEM-3 tariff. Over 20 formal parties in that proceeding have since presented their initial Proposals in March, drafted Opening Briefs in late August, and most recently submitted Reply Briefs in September. Our blog focuses primarily on the arguments of the California Solar and Storage Association (CALSSA), Solar Energy Industries Association (SEIA), and the three major investor-owned utilities (IOUs) of Pacific Gas and Electric, San Diego Gas and Electric, and Southern California Edison.

Energy and Environmental Economics, Inc. (E3) wrote a white paper titledAlternative Ratemaking Mechanisms for Distributed Energy Resources that provided a perspective on the different types of NEM frameworks California could instill to better align NEM compensation with the benefits provided to the grid while preserving sustainable growth of behind the meter renewable generation. E3’s executive summary explicitly stated that “the preservation of a viable solar market is likely to require a glidepath” to implement gradual rate reform in order to transition the market.

Numerous examples were presented within parties’ testimonies that illustrated how having export values gradually step down would lessen the likelihood of a major market crash. Both Nevada and Hawaii provided clear real-world examples of state solar markets that abruptly restructured or eliminated NEM, which led to a sudden and dramatic collapse in solar deployments and lost industry jobs. Conversely, SEIA gave the example of Arizona moving away from full retail NEM to an export compensation structure based on the Resource Comparison Proxy (RCP), a tool very similar to California’s ACC. When Arizona’s new NEM structure was implemented in 2017, reductions of the export compensation value were limited to 10% annually. The slow and steady approach enabled the state’s solar industry to continue growing sustainably.

Both CALSSA and SEIA initially proposed five-step glidepath frameworks that set export rates at a defined percentage of utility retail rates, thus having the value of solar decrease gradually with each step. SEIA’s glidepath proposed a requirement of enrollment under a predetermined “electrification rate”, a non-tiered rate that includes an aggressive time-of-use (TOU) structure. This type of rate design would result in significantly lower compensation for solar-only systems, encouraging the deployment of solar plus storage systems that can be cycled daily, charging from solar-generated during “off-peak” hours and discharging throughout the “on-peak” period. As SEIA’s table below indicates, the progression of steps would be triggered by aggregate megawatt (MW) capacities of solar and solar-plus-storage installations. This capacity-based step-down methodology is similar to that of the California Solar Initiative (CSI) program.

CALSSA’s initial proposal included two separate glidepath frameworks. The first is similar to SEIA’s in that it expresses export values as a percentage of retail rates but unlike SEIA’s, the percentages would begin immediately upon implementation of NEM-3, with steps designed to take two years each.

After these initial proposals were submitted, in June of this year the CPUC approved a decision that adopted the Avoided Cost Calculator (ACC) methodology for setting export rates. The ACC was originally created by E3 to aid the CPUC in demand-side cost-effectiveness proceedings. The calculator generates hourly avoided cost values – the amount a utility saves when distributed energy resources are installed. CALSSA and SEIA did reference the 2020 ACC when determining when and at what level to end the stepdown in export compensation. The significant reduction in export values based on the ACC prompted CALSSA to create and present an additional glidepath framework for the CPUC to consider. 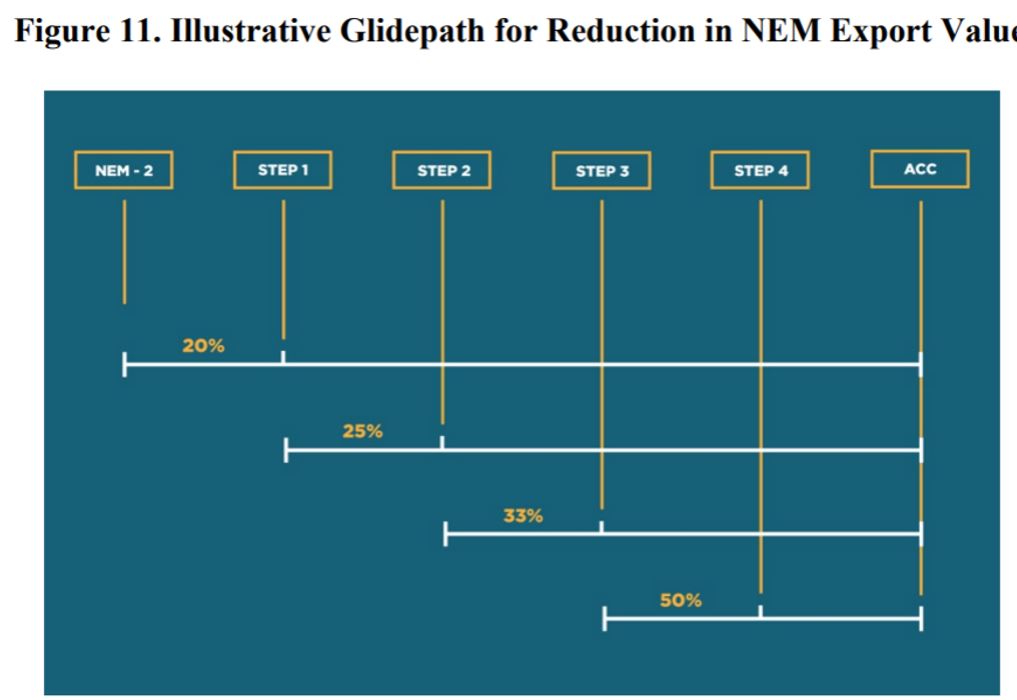 The illustration above shows an alternative glidepath proposed, with each stepdown based on a percentage change between the export compensation of the previous step and the values derived from the ACC at the time the step is implemented. For example, if Step 3 were implemented in 2026, the export compensation rate would be reduced 50% of the way between the Step 2 value and the 2026 ACC.

It’s also important to note that both CALSSA’s and SEIA’s glidepath frameworks proposed a 20-year term of locking in “vintage” export values. This effectively means a customer’s export rate would be locked in at the time of interconnection, and not fluctuate over time as ACC values get updated. It’s also important to note that CALSSA’s and SEIA’s successor NEM tariff proposals focus primarily on the residential market. CALSSA argued that changing NEM for commercial customers is unwarranted, referencing the Net-Energy Metering 2.0 Lookback Study which finds that non-residential customers more than cover their cost of service. SEIA agrees with this standpoint and adds within their Opening Brief that with “the recent slowdown in the commercial market, coupled with the statutory directive to design a successor tariff that will allow the industry to grow sustainably”, the Commission should maintain the current NEM compensation structure for non-residential customers.

Pacific Gas and Electric (PG&E), San Diego Gas and Electric (SDG&E), and Southern California Edison (SCE), referred to as “The Joint Utilities” throughout the proceeding, proposed a “Reform Tariff” that entails a cost-based default rate for residential customers, a value-based Export Compensation Rate (ECR), instantaneous TOU netting with monthly true-ups, and a Grid Benefits Charge (GBC) for all customers that is based on system size. The idea of a “glidepath” is not mentioned in any of the documents submitted. Instead, the IOUs have proposed that customers should be transitioned to the Reform Tariff promptly after the CPUC issues its Final Decision on NEM-3.

The ECR would be based on the Avoided Cost Calculator, using a one-year forward estimate, with time-of-export (TOE) periods; rates would also be capped to not exceed each respective IOU’s volumetric commodity rate. The IOUs state within their Opening Brief that one of the major defects of the current net metering tariff is the fact that exports are compensated at the full retail rate, minus non-bypassable charges (NBCs), because it is a rate “much higher than the price the utility pays for other power supply”. Furthermore, with the desire to keep the ECR fluid, changing based on annual adjustments made to the ACC, The Joint Utilities’ proposal expresses that there would be no legacy treatment under the Reform Tariff. This means that customers would not be able to lock in an export rate, and it would be subject to annual fluctuations.

The next step in the NEM-3 proceeding is the CPUC’s Proposed Decision (PD), which is scheduled to be released in early December, which is 90 days after reply briefs were submitted. A final vote on the decision could come as early as 30 days after the Proposed Decision. Although it would not be a surprise to see formal protests to the PD, which could delay a final vote and implementation by another couple of months. All that said, we should have a good idea of what the NEM-3 tariff will look like by end of this year.

The Energy Toolbase team, alongside CALSSA recently hosted a webinar where we discussed the glidepath, and what the economic effect of reduced ACC/export values would have on projects:What Will NEM-3 Mean for Commercial Solar + Storage Projects in California.