Southern California Edison (SCE) is in the process of rolling out new rates for its residential, commercial and agriculture customers. These new rates will have a significant impact on the economics of solar and energy storage projects, driven largely by the fact that the "on-peak" time-of-use (TOU) periods are shifting much later in the evening to 4 to 9 pm. Understanding the basic characteristics of these rates and where the most significant changes will be felt is important to accurately calculate and present savings analysis to end customers. 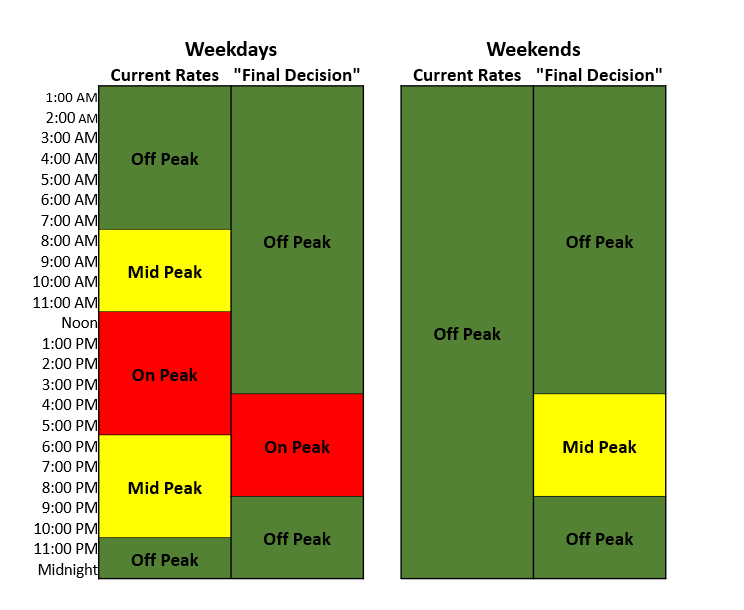 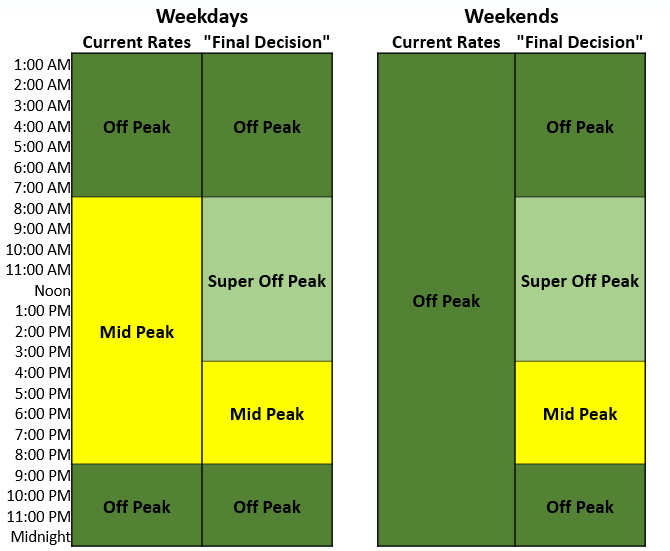 Residential customers who qualify for grandfathering include:

Rates that will be closed to new customers upon implementation include:

Grandfathered customers are eligible to remain on these rates until their grandfathering period ends. Customers who are not grandfathered will be transitioned to another time-of-use rate beginning Q4 of 2020. The “Final Decision” version of these rates within Energy Toolbase reflects the new charges that will be implemented in March along with the currently effective time-of-use periods. TOU-D-A and TOU-D-B have an on-peak period of 2-8 pm Monday through Friday for both winter and summer. For TOU-D-T, the on-peak period is weekdays noon to 6 pm for both seasons. Lastly, for TOU-EV-1, the on-peak period is noon to 9 pm every day all year long.

The currently effective TOU-D rates with the option of having a 4-9 pm or 5-8 pm peak will still be in effect and available to new customers. The structure of these rates is not changing, but the difference between on and off-peak charges is pretty significant (much greater than the residential rates of PG&E and SDG&E).

In addition to these rates, SCE will be offering an optional rate called TOU-D PRIME. This residential rate is intended for customers with high usage or customers that have electric vehicles, behind-the-meter storage systems, electric heat pump systems, or space heating. The availability of this rate will be concurrent with the closing of rate schedules TOU-D-A, TOU-D-T, TOU-D-B, TOU-EV-1,  which again is estimated to take place sometime this March. 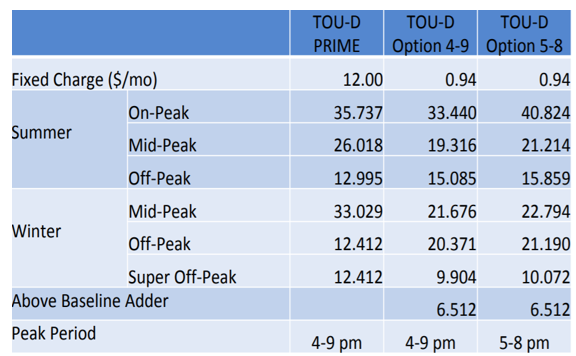 We've included a comparison of how TOU-D Option 4-9 pm (effective January 1st 2019) looks in Energy Toolbase compared to the Final Decision rate (on the right) that will go into effect in March. With a tiered baseline credit and time-related charges, this rate schedule showcases one of the many complex tier structures our platform can model.

A reason why SCE might have updated this rate this month was to get the rates closer to what they'll become in March. There isn't too much variance among the charges. The rates shown below are for customers in region 14 receiving basic service. The baseline amounts are scheduled to change come March so depending on region, service type, and season customers will either see an increase or decrease in the amount of kWh's eligible for the baseline credit.

These rate changes are happening, and they're happening soon. These new "final decision" rates are the most significant changes to SCE rates in the last decade, and they'll have a significant impact on the economics of solar and storage projects. Generally speaking, the value of solar will get eroded as a result of later evening on-peak periods.

Now that these rates are on the brink of implementation, it's important for solar salespeople to be modeling projects with these new "final decision" rates, and communicating these changes to customers. You can start modeling projects with SCE's "final decision" rates in Energy Toolbase by starting a 14-day free trial. Check out our full webinar on SCE's 2019 Final Decision Rates: