On July 16th, 2020, the State of New York’s Public Service Commission (PSC) issued an Order adopting new rules for the State’s net energy metering (NEM) successor tariff. With the implementation of the Value of Distributed Energy Resources (VDER) Transition Order in March of 2017, the PSC established Phase One NEM as a bridge for projects interconnected before January 1, 2020 (later extended to 1/1/2021). Under Phase One NEM, residential projects and non-residential projects under 750kW were authorized to receive compensation under similar rules as the original NEM tariff, with minor changes such as 20-year limited terms and no annual true-up payouts.

In the VDER Transition Order, the PSC directed its staff to develop a successor tariff to Phase One NEM aimed at limiting the cost shifts that occur when customers adopt solar PV. In a staff whitepaper submitted in December of 2019, potential cost shifts were estimated to be in the range of $3.00 to $7.00 per kW DC from solar PV customers to non-solar PV customers, depending on utility and customer rate class. The whitepaper analyzed the potential impacts of various mass-market rate reform scenarios to mitigate the cost shift. A newly created Customer Benefit Contribution (CBC) charge was proposed, which is effectively a non-bypassable volumetric charge that solar customers cannot offset.

The successor tariff order issued in July adopted much of the recommendations from the staff whitepaper, with a handful of modifications. At the highest level, the successor tariff is essentially a continuation of the expiring Phase One NEM tariff along with the addition of the monthly CBC charge. Mass-market rate reform, while considered instrumental to the future expansion of distributed generation in New York and the focus of the REV Track II Order, was left in limbo due to the lack of interval data available for residential and small commercial customers. It was agreed by the PSC that more time is needed for mass deployment of advanced metering infrastructure (AMI) and gathering of historical data in order to develop the rate design reform envisioned by REV.

Below we have summarized the provisions of the successor tariff, highlighting continuations from Phase One NEM as well as new changes in the tariff that will be implemented.

There are two main take-aways from the successor tariff that will have an impact on the value of net-metered projects in New York. The obvious and most impactful change to be implemented is the Customer Benefit Contribution (CBC) charge, which solar customers will incur and cannot be netted out with their solar production. Based on the analysis found in the staff whitepaper, these fees will impact the payback of these systems by anywhere from 3.6% and 7.8% depending on utility and customer rate class. This graph below represents PSC estimates for CBC charges based on utility and class. 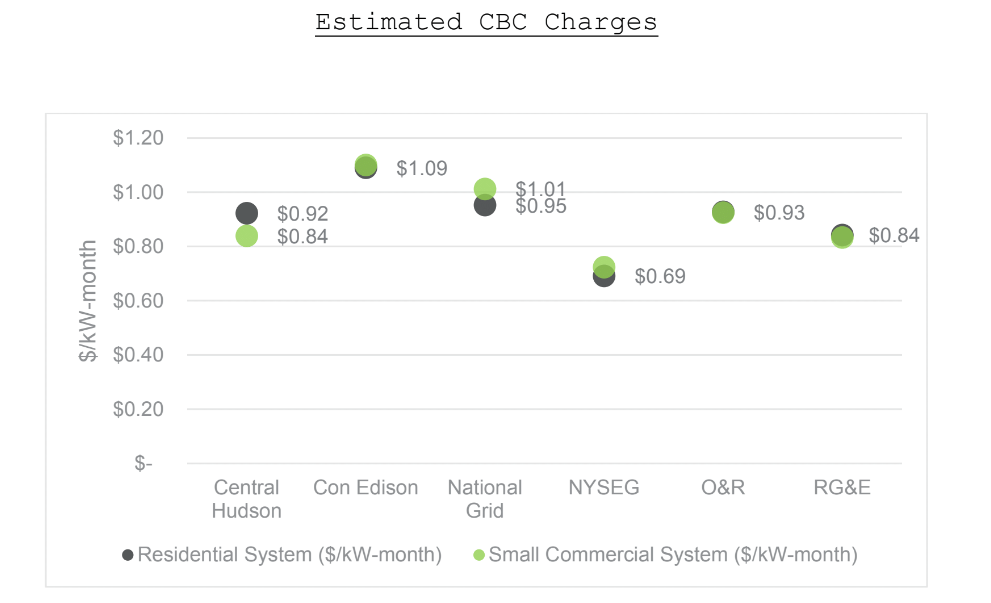 These charges are based on costs related to distribution system maintenance as well as policy programs that aid low-income customers and fund clean energy & energy efficiency programs. As these program costs change over time, the CBC charge will be updated to accurately account for these adjustments. While the charge amount may increase or decrease, an increase will never exceed the amount increase a non-solar customer would see on their monthly electric bill.

Another impactful provision of the successor tariff to note is the crediting method for grid injections from NEM customers on TOU rate schedules. Historically, TOU customers received volumetric credits for injections that could only offset the energy consumed during the same TOU window, sometimes referred to as a TOU lane. Beginning on January 1, 2022, these customers will now receive monetary credit that can be applied to the overall energy charges on a monthly statement. This change will benefit solar customers that are net exporters within a given time-of-use window. The net effect will vary depending on the customer’s usage patterns and solar system size. For some customers, the benefit of this crediting change could be quite significant.

For the remainder of the yet to be defined aspects of the successor tariff, the Joint Utilities of NY have been directed to file proposals to the PSC by November 1st, 2020. The PSC intends to have final tariffs approved by July 1st of 2021 to be implemented on January 1st of 2022.

The ETB utility rates team will update and incorporate these tariff changes into our database as they are finalized by the PSC. We currently offer the ability to model user-defined non-bypassable charges, which effectively discount the value of solar production exported back to the grid. In our upcoming release, we are launching new functionality where we will be able to define the net metering tariff specifics, such as CBC or NBC charges, at the utility rate schedule level itself. Also, in our upcoming release, we will offer the ability to dynamically calculate and model the project’s specific VDER value(s). Both changes will further streamline and simplify the modeling experience for our New York users.