A Guide to Grandfathering Protections for Solar Customers

The Wikipedia definition of grandfathering “is a provision in which an old rule continues to apply to some existing situations while a new rule will apply to all future cases. Those exempt from the new rule are said to have grandfather rights or been grandfathered in.”

Grandfathering for solar customers comes into play when utilities change the rules, normally either its utility rate designs or NEM frameworks. Grandfathering protections basically gives existing solar customers that have already gone solar the ability to remain on the old “legacy” rates and rules, which are generally more favorable than the new rules. This helps to preserve the savings that their solar system will achieve.

Why Solar Grandfathering has Become Necessary

Over the last few years, electric utilities and public utility commissions around the country have been implementing rate design and NEM changes at an increasing rate. According to the 50 States of Solar Report published by NC Clean Energy Technology Center, in 2018 alone, 47 states considered or implemented a combined 264 policy actions or rate design changes, which had an effect on behind-the-meter solar projects. This trend is absolutely expected to continue into 2019 and beyond.

The types of changes and policy actions vary dramatically. It could be a simple change to the fixed charge or minimum bill structure, a redesign of how the Time-of-use rates are structured, or a complete restructuring of the NEM or distributed generation compensation rules. The one commonality most changes share is that the new rules are generally less favorable for solar savings.

Grandfathering has become a widely used policy mechanism to mitigate the negative impact that rate design or NEM changes have on customers who have already invested in solar. Public utility commissions that approve the new policy changes have to balance the need for utilities to evolve their policies to adapt to the ever-changing grid, but also protect existing homeowners, businesses and schools that already made a long-term investment in solar. It’s not fair for utilities to move the goalposts in the middle of the game.

Hawaii has the highest levels of behind-the-meter solar installations on a per capita basis in the US. The market has grown and matured quickly, driven by the fact that Hawaii has the highest retail electricity rates in the country, which makes customer-sited solar very economically attractive. Hawaii’s NEM program, introduced in 2001, was a huge success with over 60,000 customers installing solar. As participation in the program grew rapidly, penetration levels of solar on Hawaii’s grid kept increasing, which led to a historic decision in October of 2015 when Hawaii ended their NEM program. This change dramatically shrunk the market overnight, as the new replacement programs that took NEM’s place were significantly less attractive for solar project economics. The Customer Grid-Supply (CGS) program offered participants about half the retail rate credit for electricity sent to the grid, and the Customer Self-Supply (CSS), which was designed for solar projects that do not export any electricity to the grid. That made it much harder for new projects to pencil out.

The good news was that all existing solar customers that interconnected their systems before the NEM program closed were fully grandfathered in on the existing NEM rules. From a grandfathering rules perspective, the protections were clean and straightforward: existing customers maintained NEM with their full retail-rate credit. When the CGS program later hit its cap in November of 2017 after its allocated capacity was fully subscribed, Hawaii launched two new programs: “Smart Export” and “CGS+”, both of which of course were less favorable for solar economics than the sun setting CGS program. But this time existing CGS customers were only given grandfathering protections of 5 years. Our team hosted a webinar on the Hawaiian market, which details in more depth many of the changes the Hawaiian solar market has seen over the last 5 years.

Numerous other mature solar markets outside of the US, like Germany and Australia, have experienced a similar history to Hawaii. The original market rules proved to be very favorable for early solar adopters, leading to huge program popularity and installation growth, which ultimately led to drastic policy changes to the legacy NEM or Feed-in-tariff (FIT) program. Existing customers before the program rules were changed got grandfathered, the specifics of the protections and duration varied. And new customers looking to go solar after the deadline passed got a much lesser value proposition, which stunted the growth of the market.

All solar salespeople in California are likely very familiar with the term “grandfathering”. The big three investor-owned utilities (IOUs) in California: Pacific Gas & Electric (PG&E), Southern California Edison (SCE), and San Diego Gas & Electric (SDG&E) have all made significant changes to both rate designs and NEM rules over the last few years, which has led to the implementation of grandfathering rules, which have a lot of nuances to be aware of.

The current net-metering tariff in California is commonly referred to as NEM 2.0. Solar customers that interconnected their photovoltaic (PV) systems prior to the dates listed below were grandfathered under the original net-metering tariff, “NEM 1.0”, for a period of 20 years from the date of interconnection. The dates were set based on when each IOU hit their 5% statutory cap:

The California Public Utilities Commission (CPUC) has documented the difference between NEM 1.0 and NEM 2.0 on their website here. The original NEM program in California offered full retail-value net metering. The main differences between the two programs are NEM 2.0 customers have to pay an interconnection fee, Non-bypassable charge (NBC) fees which are effectively volumetric charges that cannot be “netted-out” by solar exports, and lastly, they are required to move to TOU-based rates after installing solar.

NEM 1.0 was obviously more favorable for solar customers than NEM 2.0. The same is to be expected between NEM 3.0 and NEM 2.0. The NEM 3.0 program in California is already being discussed in policy circles and is likely less than a couple of years away from implementation.

Separate from NEM grandfathering is the issue of TOU-based rate grandfathering in California. All three of the IOU’s made significant changes to their TOU rate designs during the last general rate case (GRC) cycle. This is especially important for solar customers given that as part of NEM 2.0, all new solar customers are required to take service on TOU rates.

The IOU’s new time-of-use rate designs are radically different from their legacy TOU rates. The most notable change in the dramatic shifting of the "on-peak" period to much later in the evening (4p – 9p). On the older legacy TOU rates, the “on-peak” window had been midday (noon - 6 pm). The new TOU rate designs are not friendly for solar because most solar production occurs in the middle of the day when the sun is at its highest. When you move the “on-peak” period into the evening erodes the value of solar by effectively revaluing that solar production as cheap “off-peak” energy. Therefore, the utility bill savings that solar can achieve goes down, which is illustrated in the chart below for PG&E's E-19, Option R. 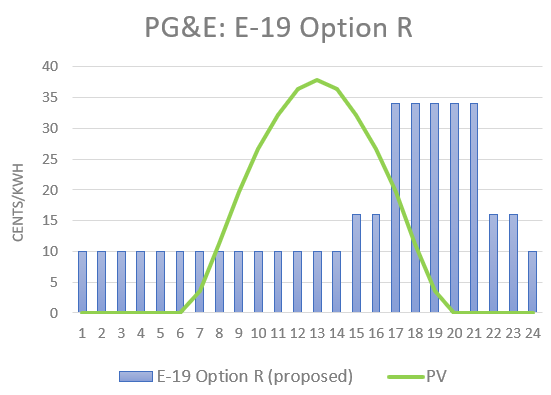 To ease this erosion effect, the CPUC has mandated grandfathering protections for existing solar customers in California. TOU grandfathering effectively allows eligible customers to remain on the “legacy” time-of-use periods, instead of being forced onto the new TOU rate designs.

Here’s a visual comparison of SCE’s old legacy “TOU-D-T” rate, vs. the new “TOU-D Option 4-9pm” rate. This is representative of the TOU changes the IOU’s implemented, although the exact changes can differ depending on each utility and specific rate schedule. 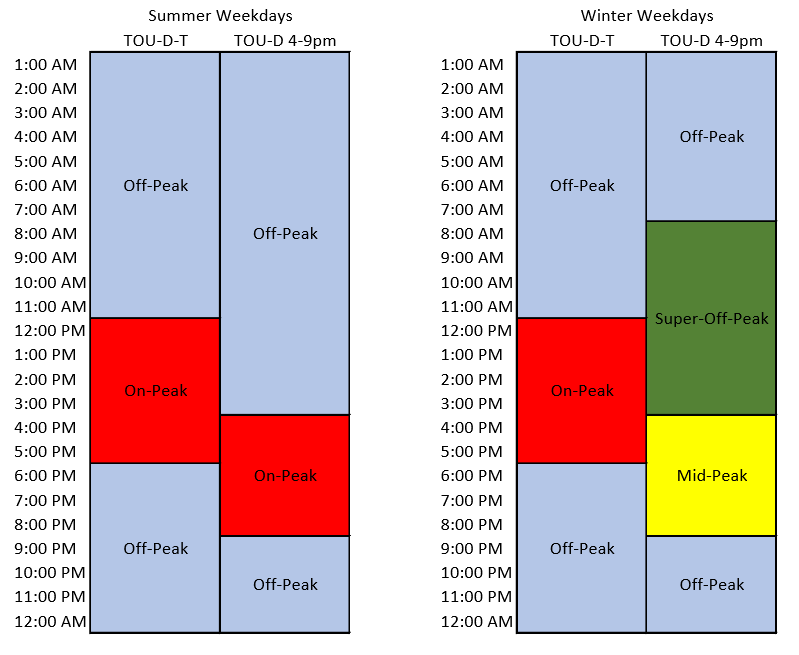 It’s very important to mention that the grandfathering benefit only pertains to the TOU periods themselves. Customers are still subjected to other changes that may occur in the rate schedule, like a change in the fixed fee or minimum bill charges, or a change to the $/kWh volumetric TOU rate. This is one of the most commonly misunderstood concepts with TOU grandfathering. Many customers and solar salespeople assume they lock in on the legacy rate which gets frozen in time. That’s not the case, the grandfathering protections only lock in how the TOU windows were defined.

For several years now, California’s three IOUs have been paving the way to default all customers to time-of-use rates. This transition is part of the initiative of the CPUC to support the state’s desire to encourage electric customers to shift their electricity use to lower-cost hours and reduce their overall consumption. The idea is to incentivize shifting high-energy tasks, such as running a pool pump or doing laundry, to times of the day when the utility procures wholesale electricity more cheaply.

Each of the CA IOUs has different timelines of when this transition will take place. Since SDG&E was the first to implement new rates, it began the transition process in March of this year while both SCE and PG&E are targeting October or November of 2020. Each IOU is required to provide customers with advanced notice and education on TOU-based rates.

The Future of Grandfathering

We expect to see a lot more grandfathering programs for solar customers in the coming years. As utilities and public utility commissions around the country continue to change their rate designs and NEM frameworks, they will likely continue to use grandfathering as a mechanism to protect existing customers from the effect of those changes. If California’s is any indication, we think it’s likely that future grandfathering rules will not be standardized.

We also can't forget that as rate designs become less favorable for solar, like what’s already being seen with the California IOUs, modeling PV projects with the addition of an energy storage system (ESS) quickly becomes the norm. On the residential front, consumers can utilize storage to avoid high energy prices during peak periods. For commercial customers, bill savings are further increased through the practice of peak demand shaving. Since most commercial rates tend to include demand charges, some including both noncoincident and TOU-related charges, peak demand shaving can really make a difference when it comes to reducing electricity costs.

Our data team at Energy Toolbase will continue tracking and updating both the grandfathered and non-grandfathered versions of rates in our database when applicable. We encourage to reach out to us if you have any questions on a specific program. Also please do share with us any new official rulings or decisions on grandfathering rules you see, as we’re always trying to stay up to date on changes.