California residential solar installers may be using a flawed approach to calculating and presenting the economics of solar projects and not even know it. Earlier this year the California Public Utilities Commission (CPUC) finalized and approved the biggest rate reforms to residential electric rates in a decade. These structural changes to rate design change the value proposition of a solar project, but are not likely being accounted for in the modeling.

Governor Jerry Brown signed Assembly Bill 327 (AB 327) into law in October of 2013, which directed the CPUC to reform residential electric rates to “allow for more accurate allocation of costs and fairly reflect the cost of service”. In July of 2015, after a long and contentious proceeding the CPUC unanimously voted to approve a final rate reform package. The final Proposed Decision can be seen here. Some of the most significant changes mandated by the CPUC were: to transition from a four-tier structure down to a two-tier structure, reduce the pricing differentials between the tiers down to 25%, institute a minimum bill, and implement a super user charge. These changes will be phased-in gradually through 2020 when the “end-state” rate design is ultimately reached. CALSEIA (California Solar Energy Industries Association) prepared a summary of the changes and phase-in schedule which can be viewed here: 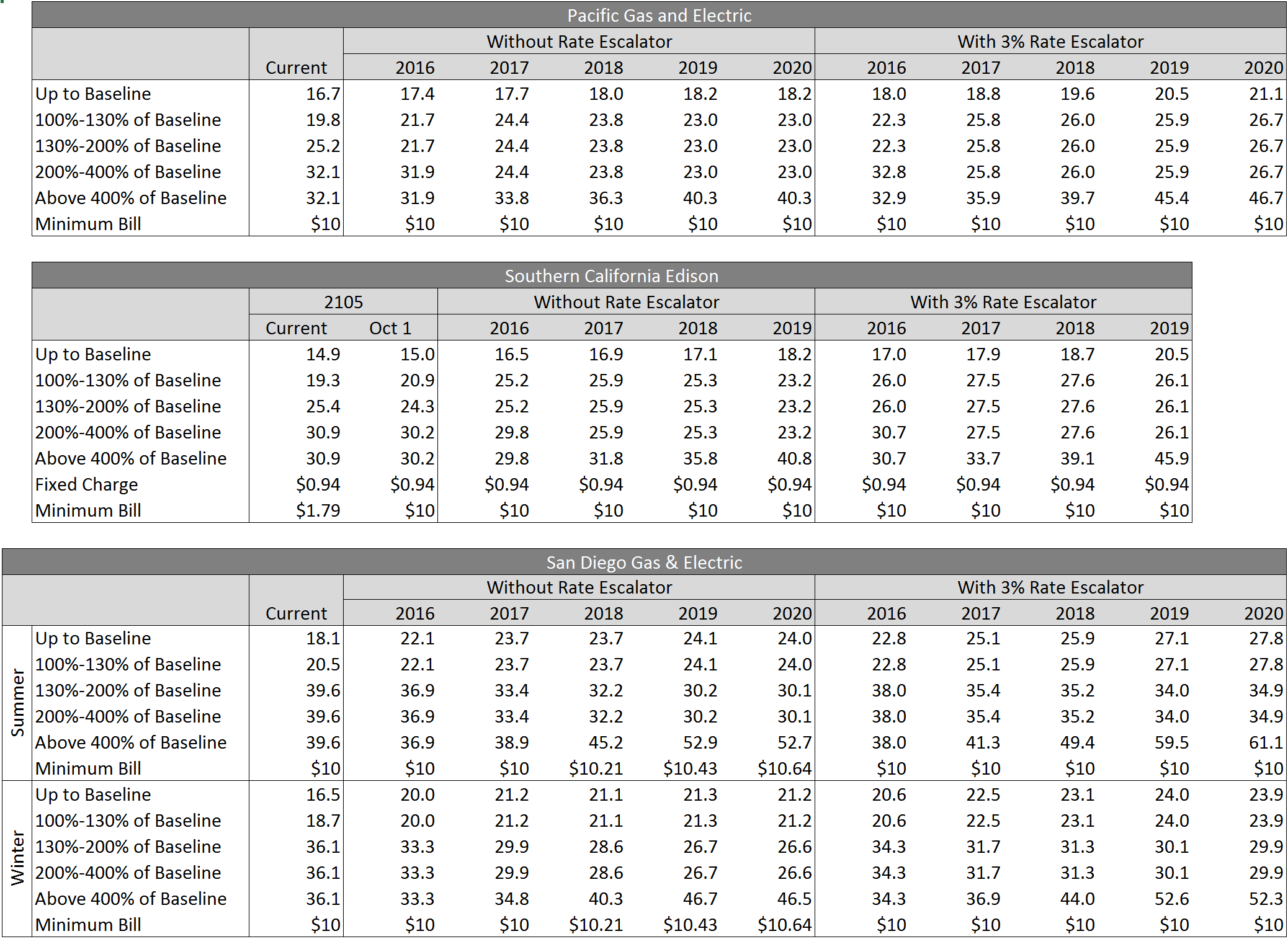 Implementation of this landmark rate reform has officially begun. On 9/1/15 PG&E and SDG&E implemented their first rate changes related to this proceeding, and SCE began a month later on 10/1/15.

The standard method for calculating the economics of a project is to calculate the ‘annual dollar savings’ (aka avoided cost) for a specific customer. This calculation is generally run based on the current/effective utility rates in place at the time, which is representative of the dollar savings at that time. That ‘annual dollar savings’ value is then escalated based on a utility escalation rate assumption, which is typically between 3 to 6% for residential projects in California. The ‘payback period’ and ‘rate of return’ are determined by adding up all the project costs, subtracting out any incentives, and then escalating the avoided cost over the life of the project. This method has worked well because it’s simple, transparent and easily understood by the customer.

But it’s easy to see that this method is inadequate when structural rate reform changes are scheduled to be phased-in, like the current situation in California. Basing 25 or 30 years of dollar savings entirely on the current rates, when those rates are fundamentally changing doesn’t provide an accurate representation of economics over the projects’ lifetime. Using a simple escalation rate cannot capture the impending rate reform changes ahead. The methodology works for rate changes; it doesn’t really work for rate reform.

What then is the best way to calculate project economics in light of impending rate reform changes?

Calculating the ‘annual dollar savings’ separately for each year based on the phase-in schedule would be a more technically accurate way of modeling. But this sacrifices simplicity. It would difficult to convey this methodology to a customer, which could make the value proposition too confusing. Alternatively it would be simple to calculate the ‘annual dollar savings’ using the ‘end-state’ rates, instead of the current rates. At the very least it would be worthwhile to know how the avoided cost compares versus calculating based off the current/effective rates. (Quick plug: our platform Energy Toolbase has the proposed “end state rates for all three IOU’s, both with and without the assumed 3% escalator” loaded into our database, making it quick and easy to determine what that difference would be for a specific homeowner).

This blog is meant to be informative rather than alarmist. Many California residential solar salespeople may not be fully aware of these dynamics. At the very least solar installers should be educated on this, and be prepared to talk on this issue if a potential customer asks. From a consumer protection perspective, homeowners considering going solar today have a right to know.