Energy Storage Net Energy Metering (aka NEM Paired Storage) allows a customer with a behind-the-meter solar + storage system to discharge their battery, exporting stored energy back to the grid and receive a Net Energy Metering credit, if the battery can verifiably charge 100% from solar. In certain cases, NEM Paired Storage can meaningfully increase the amount of savings an Energy Storage System (ESS) can capture. As illustrated in the graphic below, Energy Storage Net Metering effectively enables a battery to utilize its full capacity by discharging fully when a strong price signal exists, regardless of customer usage. 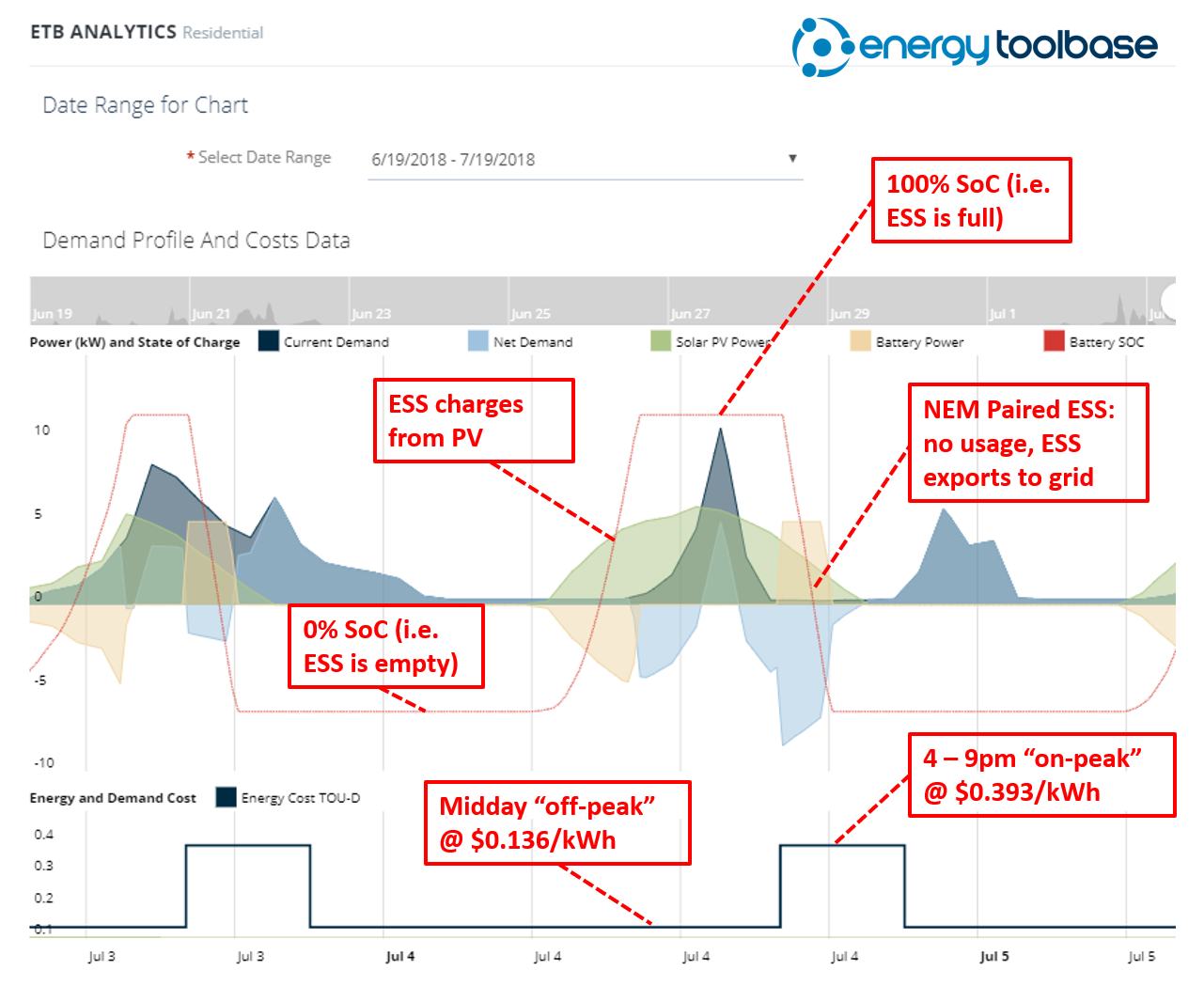 NEM Paired Storage was codified into law in California in February of 2019 when the California Public Utilities Commission (CPUC) finalized a decision permitting customers with ESS to receive credits for storage energy sent back to the grid if the storage system verifiably charged entirely from solar. The policy change was initiated by the California Solar and Storage Association (CALSSA) who filed a petition for modification (PFM) to grant the permissibility of NEM Paired Storage. CALSSA’s PFM drew support from California’s big three investor-owned utilities who filed a statement of support, which helped pave the way to the CPUC decision. We published a blog “CPUC Approves Energy Storage Net Metering” summarizing the eligibility requirements laid out in that CPUC ruling.

Several months later the IOU’s began allowing NEM paired storage systems to be interconnected to their grid. We published another blog in December of 2019 entitled “California Utilities now Accepting Applications for Net Energy Metering (NEM) – Paired Storage”, which summarized many of the new metering and verification requirements, including the newly created Certification Requirements Decision (CRD) standard, which allowed utilities to verify the ESS charges entirely from PV. Previously, for ESS systems larger than 10 kW, customers were required to install additional metering hardware, which could be time-consuming and prohibitively expensive.

To illustrate the value of Energy Storage Net Metering, we compared two identical solar + storage systems operating in Time-of-use (TOU) arbitrage mode. We held all project inputs and assumptions constant, except in Case #1 we ran the ESS dispatch simulation assuming ESS cannot export to grid, and in Case #2 we ran the simulation assuming NEM paired storage: ESS can export to grid, but it must charge entirely from PV.

Assumptions used in the case study: 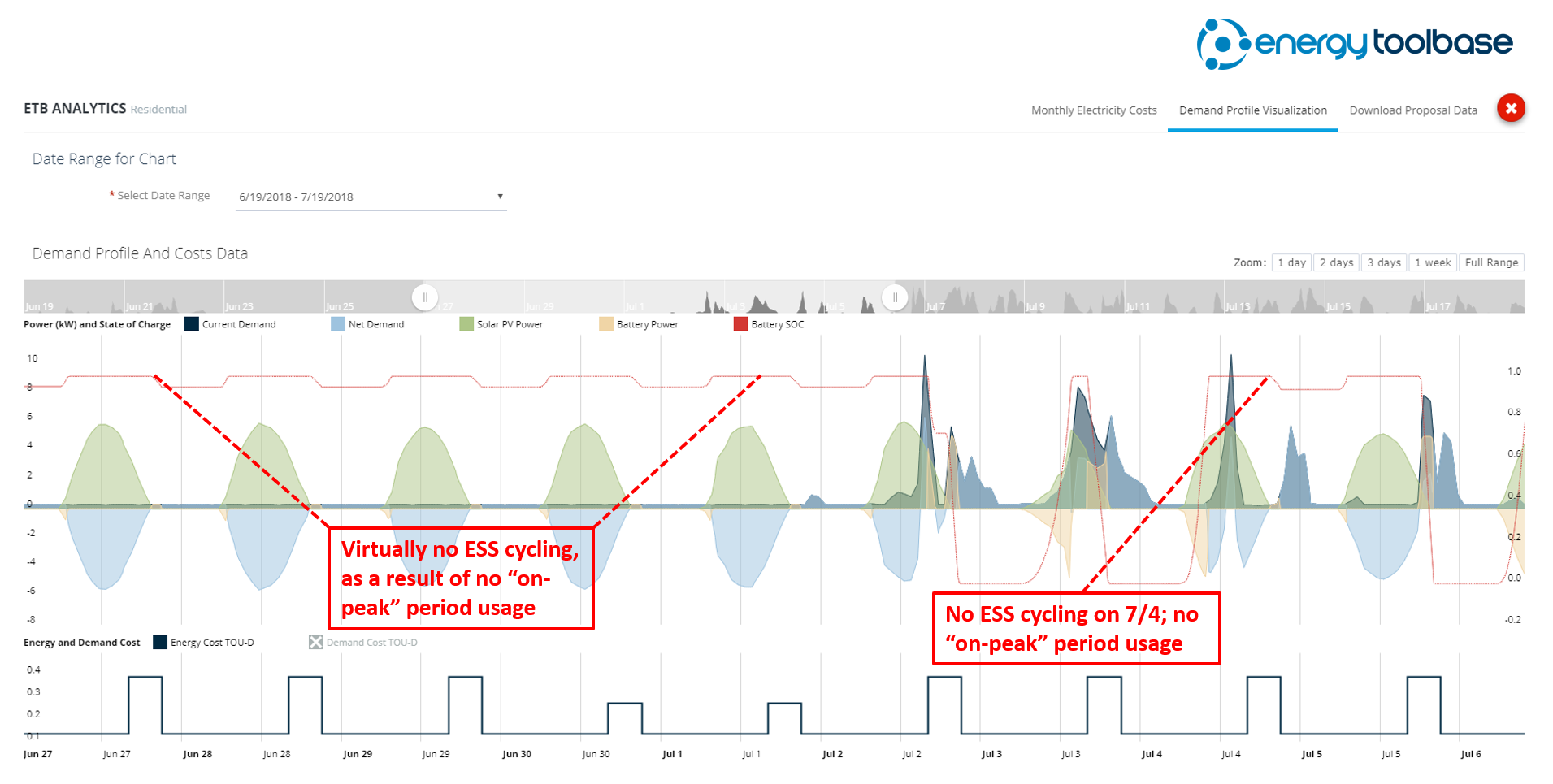 Explanation: The chart above displays: energy usage, PV production, ESS dispatch, net usage, and ESS State of Charge (SoC) over a 10-day period: June 27th – July 6th. During the first 5 days (6/27 – 7/1) I was gone on vacation and had virtually no consumption. As a result, the ESS barely cycled, only discharging ~5% of its rated capacity each day because it was restricted to only discharging to offset load.

The SCE residential TOU-D-PRIME rate schedule is an advantageous rate for ESS economics because it has a wide TOU price differential year-round. The on-peak vs. off-peak differential is $0.26/kWh in the summer and $0.23/kWh in the winter. But given that I was gone and had no consumption during the first 5 days, the ESS was handcuffed and effectively missed out on the lucrative opportunity to discharge during the 4 – 9 pm, on-peak period. Also note on July 4th, after I returned home, I was gone during the 4 – 9 pm period and had virtually no usage, which again prevented the ESS from dispatching and utilizing its full capacity.

Annual ESS result: Using the Energy Toolbase storage simulation engine, we ran a 365-day dispatch with the restriction that ESS could not export to the grid. The ESS captured $504 in utility bill savings, cycling 236 equivalent cycles for the year. 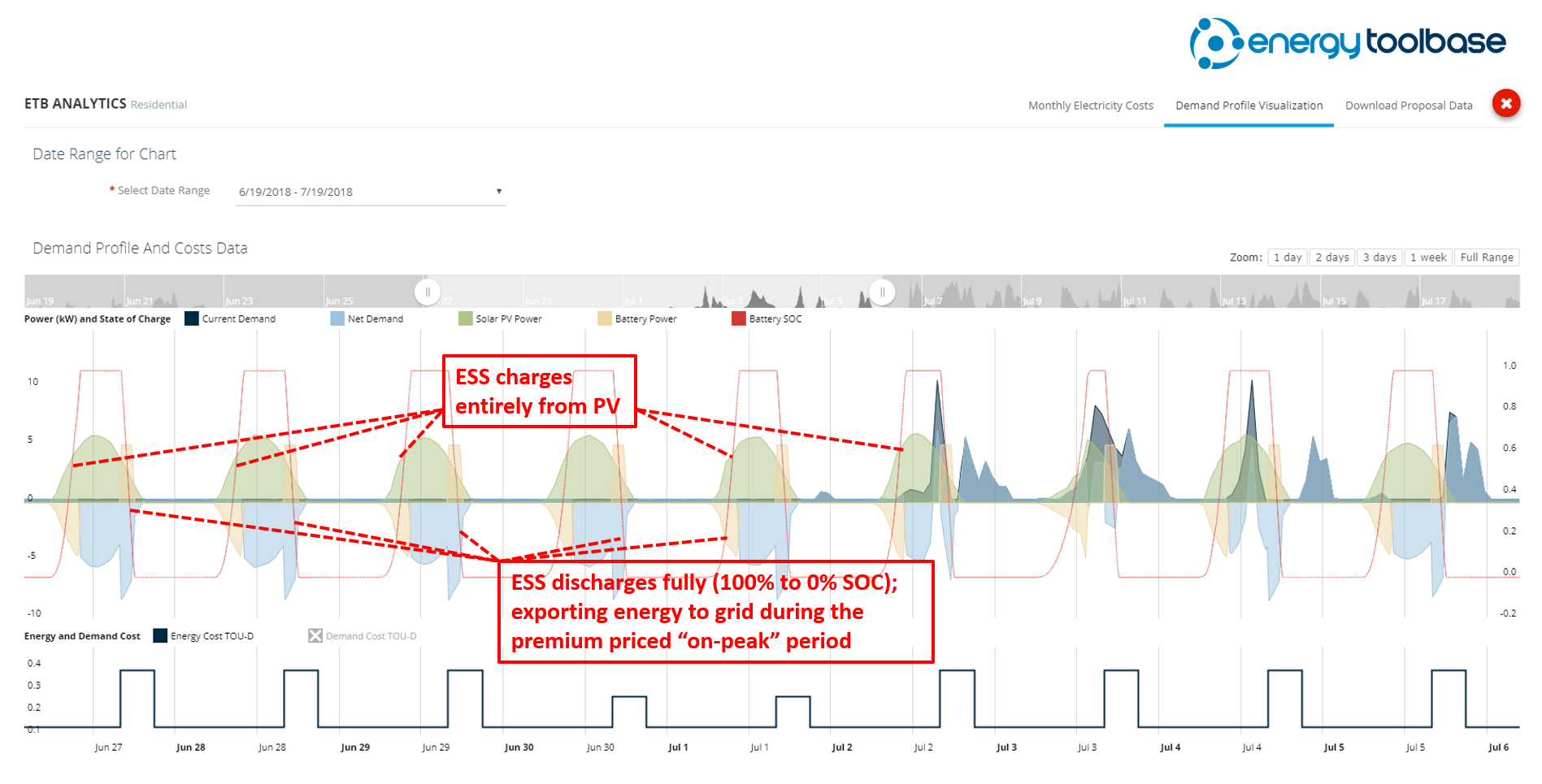 Explanation: Zooming in on the same period; during the 5 days I was gone (6/27 - 7/1) the ESS fully cycled, charging entirely from solar during the mid-day off-peak period, and then discharging completely, from 100% SoC to 0%, during the on-peak period. NEM paired storage enabled me to fully capture the lucrative $0.26/kWh TOU arbitrage differential while I was gone on vacation and had no consumption.

Annual result: We ran an ESS dispatch simulation requiring that ESS charges entirely from PV and permitting ESS to export to the grid. The ESS captured $715 in utility bill savings, cycling 360 equivalent cycles for the year. By being able to fully utilize the battery’s capacity, regardless of my on-peak period consumption, resulted in 30% more utility bill savings compared to the no-ESS-exports run.

Note: this was not a cherry-picked example, this comparison was based on the actual 365-day usage of my home. There are certainly cases where the increased savings percentage that a homeowner could achieve as a result of NEM Paired Storage would be much higher.

Why NEM Paired Storage is so valuable

As illustrated above, Energy Storage Net Metering enabled the battery to utilize its full capacity by discharging when the price signal is strong, without any restrictions. For this same reason, NEM Paired Storage can provide a meaningful benefit to commercial and industrial (C&I) customers also. Especially customers that have load profiles that use most of their energy during the day and then drop-off significantly at night, like an office building. For C&I solar + storage customers in California it’s generally most economically favorable to rate switch to a “solar-friendly” rate option, such as SDG&E’s DG-R rate, PG&E’s B-19 (Option R), or SCE’s GS-2-TOU (Option E) rate. These “solar-friendly” rates effectively reduce $/kW demand charges in exchange for higher $/kWh energy charges. Therefore, capturing the TOU arbitrage value stream becomes a much more meaningful part of the ESS savings opportunity. To maximize utility bill savings, the storage energy management system (EMS), which controls the battery dispatch would target both demand charge management and TOU arbitrage value streams. In Energy Toolbase, we allow users to run value stacking ESS dispatch simulations, either restricting ESS exports to the grid or allowing them.

Lastly, it's important to point out that NEM paired storage also provides significant benefits to utilities and independent system operators (ISO’s). Enabling storage systems to dispatch their full capacity can help alleviate low supply, high demand grid imbalance issues. In California, the “duck curve” is a result of a sharp ramp-up in the system peak in the early evening due to residential load coming online, coupled with falling supply from solar PV production going to zero. This is a perfect opportunity for NEM Paired Storage to play a role and is not much different from utility grid services programs that allow distributed energy resources to participate in wholesale markets and capture revenue through demand response. Energy storage net metering is a win-win situation: it enables a battery to utilize its full capacity and maximize value capture, and it helps utilities balance the grid. Hopefully, other states will codify this mechanism into law and create strong price signals so all parties can benefit.

We recently hosted a webinar titled 'NEM Paired Storage - Why It Matters'. You can watch here: