A historic thing happened earlier this month for residential energy storage economics. For the first time ever, the project economics of a solar + storage project operated in time-of-use (TOU) arbitrage mode, beat the economics of a standalone solar PV project. This noteworthy occurrence happened in the Southern California Edison (SCE) service territory when SCE implemented its new TOU rate structures on March 1.

At Energy Toolbase, we have modeled the utility bill savings and project economics of Energy Storage System (ESS) projects operating in TOU arbitrage mode, on hundreds of TOU­­­­­ rate schedules around the country. “TOU arbitrage mode” simply means utilizing an ESS to charge the battery when energy is cheap (i.e. “off-peak”), then discharge back when energy is expensive (i.e. “on-peak”). Just like arbitrage in the stock market, it means to buy low, sell high, and capture the difference. On every residential rate schedule that we have modeled, adding ESS to a solar project erodes the economics of the project. In many cases adding storage weakens the financial return significantly.

The California Public Utilities Commission (CPUC) recently approved the big three Investor Owned Utilities (IOU’s) to start transitioning residential customers onto time-of-use based rates. This was done to encourage conservation and provide a price signal for customers to shift usage from on-peak to off-peak hours. SCE’s new TOU rate designs went into effect on a voluntary basis starting on March 1 and all residential customers will default onto TOU rates in October of next year.

The IOU’s new time-of-use rate designs have been controversial. Solar industry advocates protested the new rate structures, which are radically different from the tiered-rate and TOU-rate designs that had been in effect previously. The most notable change in the new TOU rates is the dramatic shifting of the "on-peak" period to much later in the evening. The old legacy “on-peak” TOU window had previously been midday from noon to 6 pm. The new rates shift the “on-peak” window to much later in the evening, to 4 to 9 pm (or 5 to 8 pm in some cases). Ironically, midday energy usage used to be the most expensive (“on-peak”); now it’s become the cheapest (“off-peak” or “super-off peak”). All three of the IOU’s are implementing similar TOU window shifts.

The new rate designs are not friendly for solar. With the “on-peak” period moving later in the day, the value of solar gets eroded.  Effectively most solar production gets revalued as cheap “off-peak” energy. Therefore, the utility bill savings that solar can achieve goes down; for many customers significantly. To ease this erosion effect, the CPUC has mandated grandfathering protections for existing solar homeowners in California. But there is a silver lining to these new rates. This bad news for solar is great news for storage, as these new TOU rate designs are very favorable for ESS economics. 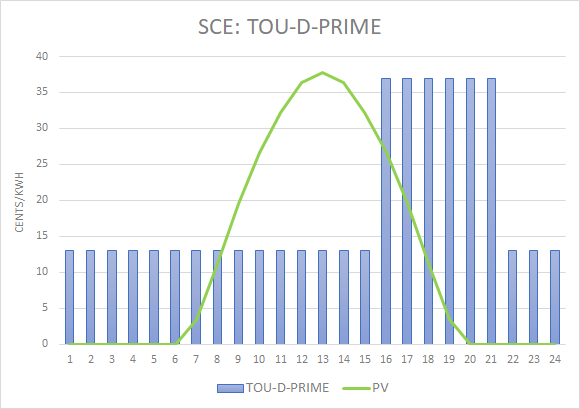 On March 1, SCE introduced a new optional rate schedule intended specifically for homeowners with energy storage: the TOU-D-PRIME rate. This TOU-D-PRIME rate has all the elements of an advantageous rate for Energy Storage System (ESS) economics. The rate has a wide TOU price differential in both the winter and summer season: $24/cents/kilowatt-hour in the summer and $21/cents/kWh in the winter. Also, the PRIME rate offers this price opportunity all seven days of the week, rather than only Monday through Friday, which is typical of most residential TOU schedules. This strong price signal effectively allows an ESS to cycle all 365 days of the year, charging off-peak and discharging on-peak, and capturing a lucrative price difference. The TOU windows also happen to align perfectly for optimal ESS charging and discharging. “Off-peak” is 8 am to 4 pm, so the ESS can charge entirely from PV and be (ITC) investment tax credit compliant. “On-peak” is 4 pm to 9 pm, so the ESS is incentivized to discharge at a time when residential customers have their highest energy consumption. If utilities in other parts of the country want to truly incentivize behind-the-meter residential energy storage, they should look to replicate the design of SCE’s TOU-D-PRIME! 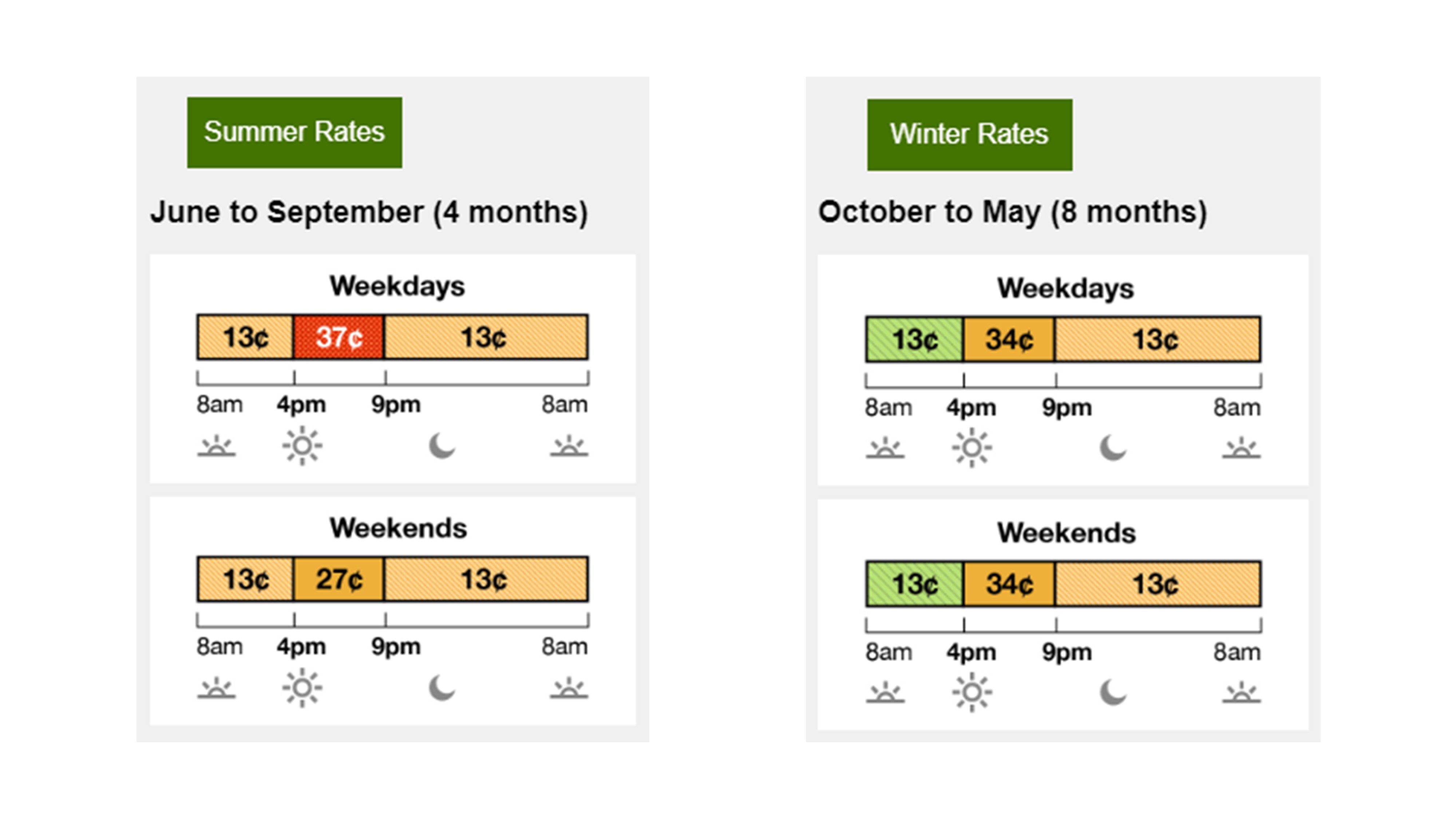 Using Energy Toolbase we modeled the project economics of a PV-only project, versus a PV+ESS project for a typical homeowner in the SCE service territory. We used reasonable market-rate assumptions, which are summarized below:

Notes & disclaimers: this analysis was run in Energy Toolbase using “TOU-D-PRIME” as both the before and after rate. The results were very similar when modeling with SCE’s residential rate schedule “D” as the before rate, and “TOU-D-PRIME” as the after rate. We ran this same analysis across a range of different solar PV system sizes (3 kW, 4 kW, 5 kW, 6 kW, 7 kW, 8 kW); in all cases the PV+ESS project economics beat the standalone-PV project economics. We spoke with multiple leading residential installation companies in California who install the StorEdge + LG RESU10H system to confirm that $11,000 for the total turn-key ESS installed cost is conservative. 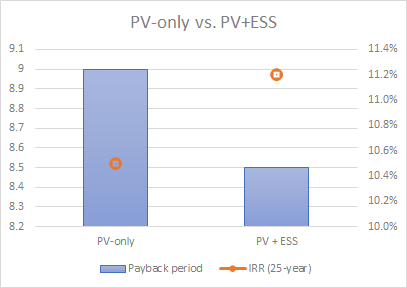 In our example above, it’s important to point out that it’s a combination of factors that enable the PV+ESS economics to beat the PV-only. In addition to the storage-friendly TOU-D-PRIME rate, the ESS project economics are aided by: (i) the (SGIP) self-generation incentive program rebate, (ii) the fact that we’re assuming the ESS qualified for the 30% federal investment tax credit, and (iii) the declining market-rate cost of ESS hardware and installation.

The TOU-D-PRIME rate is an outlier. The reality today is that most residential rate schedules do not offer the ability for ESS to significantly reduce a consumer’s utility bill. Because of this, homeowners that have installed ESS have been motivated by non-financial reasons, such as having back-up power in the event of a grid outage, being more energy-independent and less reliant on their utility company, and also the cool factor of being an early adopter of a new technology that most believe will one day revolutionize the grid.

The U.S. residential energy storage market has already been growing steadily over the last couple of years, even without a strong financial use case. At Energy Toolbase we have always believed it would be a real inflection point in the market when adding storage to a solar project actually improves the project economics. We expect residential ESS deployments to ramp up aggressively in SCE now that this opportunity exists. Adding ESS to a PV project is a no-brainer for a homeowner when it can improve their financial return, deliver back-up power, make them more energy independent, and give them bragging rights. We hope this historic occurrence gets replicated soon in other regional markets.