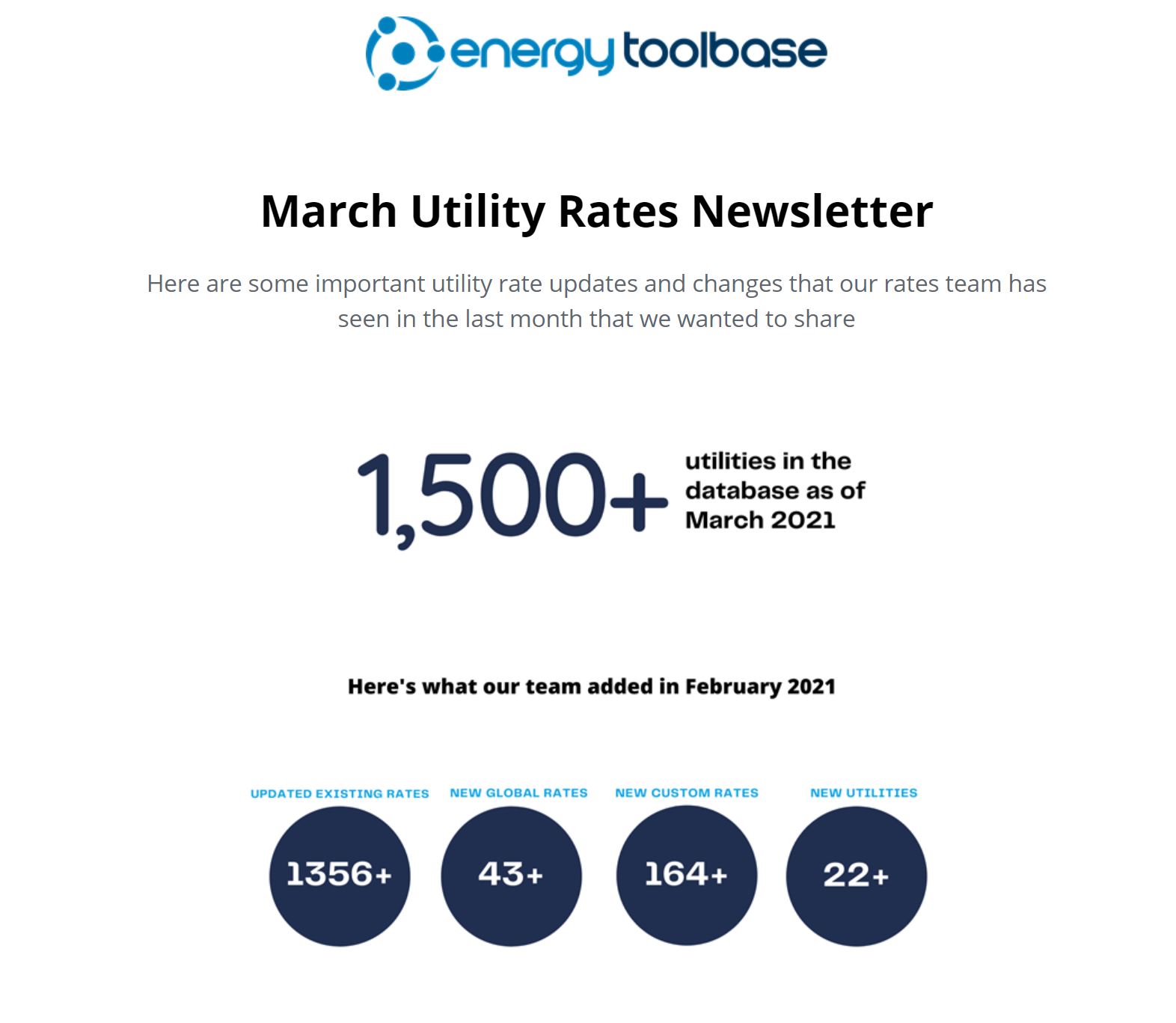 In February, Southern California Edison (SCE) released its first rate change of 2021. Per Advice Letter 4377-E-A this rate change is in relation to SCE’s estimated increase in consolidated revenue requirements, $269.125 million from revenue requirements authorized in October of last year. The bundled average rate impact per class amounts to roughly a 5% increase for residential and large general service rates and an 8% increase for small and medium general service and agricultural/pumping rates.

All general service and agricultural/pumping rates experienced an increase in the customer charge; this charge is non-volumetric and assessed monthly. The demand charges incorporated within these rate classes also changed, some increasing by $1/kW or more. When looking at the components that make up the volumetric energy charges, noteworthy changes include the Distribution charge and the Public Purpose Programs Charge (PPPC). The Distribution charge increased by almost $0.01/kWh for residential rates and, although not as substantially, the PPPC increased across all rate classes. The PPPC is a non-bypassable charge, one of four charges a solar customer is unable to offset with the exception of self-consumption.

The 2/1/2021 effective rates are readily available in ETB’s database. It is always suggested that users incorporate the most effective rates into their proposals as it is a better representation of current costs and future savings. If when selecting a rate the most current effective date is not available, please reach out to utilityraterequest@energytoolbase.com for assistance.

It is becoming increasingly popular for utilities to implement surcharges to recover costs incurred for environmental compliance, Duke Energy - Kentucky was no exception when it introduced the Environmental Surcharge Mechanism in June 2018.

The Environmental Surcharge Mechanism (ESM) rider fluctuates monthly, it has the potential to be a credit, but thus far has been a charge since implementation. The ESM is assessed in the form of a percentage that is applied to base charges. Its purpose is to recover the environmental compliance costs incurred when adhering to the guidelines established by the Environmental Protection Agency (EPA). One of the main priorities of this initiative is requiring utilities to reduce and control toxic emissions, such as Mercury or Carbon Dioxide, from their power plants.

Including the ESM as a separate rider versus incorporating costs into the base rates allows the utility to expedite the implementation and changes made while reducing a delay in regulatory review. It also allows the utility to recover its revenue requirement separately from its sales-related revenue requirements, this allows them to have a more accurate representation of the under/over recovery related to each specific rider.

While there are several components that impact bill totals on a month-to-month basis, the ESM for February 2021 was set to an all-time high for residential rates (11.37%) and the second-highest percentage for commercial rates (16.64%). Like mentioned, this surcharge does fluctuate so it is expected, based on historical data, that in the months to come the percentages will decrease prior to increasing again.

In January of this year, the rates of Rocky Mountain Power – Utah underwent significant structural changes. All rates now have a 4-month summer season which includes the months of June through September. With May now being deemed a winter month, usage consumed during this month will be charged at a lower rate. In addition to this seasonal adjustment, predominant General Service rates 6A and 6B were further modified.

Rate 6B, a General Service – Demand Time-of-Day (TOD) rate, was discontinued. Customers who were receiving service under this rate were transitioned to rate 6, a non-TOD rate, with the option of electing service under rate 6A. Rate 6A includes the same time periods as rate 6B did, an on-peak period of 7 am-11 pm Monday through Friday with all other hours deemed off-peak. Within the next couple of months, rate 6B will be removed from Energy Toolbase’s rate database.

Furthermore, rate 6A will be removed from ETB’s database as well. Implemented January, the structure of this rate changed in a way that ETB is not readily equipped to model. A custom rate incorporating a workaround can be created, please reach out to utilityraterequest@energytoolbase.com if this rate is needed.

FAQ of the month:
How do I know what is included in the rate I am selecting?

Solar customers under net metering tariff NEM-2 are assessed these charges for any electricity consumed from the grid, regardless of what their end-of-month excess generation and consumption totals are. This means that even when a customer generates more electricity than they use, they are required to pay these charges unless all usage was solar self-consumption.

Want to start using our in-house rates team in ETB Developer? Sign up here and get 14 days free.